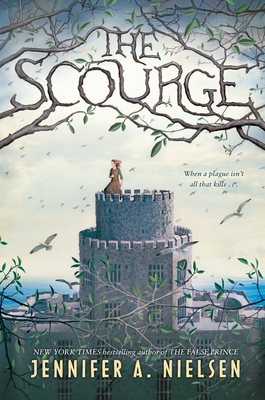 As a lethal plague sweeps through the land, Ani Mells is shocked when she is unexpectedly captured by the governor's wardens and forced to submit to a test for the deadly Scourge. She is even more surprised when the test results come back positive, and she is sent to Attic Island, a former prison turned refuge -- and quarantine colony -- for the ill. The Scourge's victims, Ani now among them, can only expect to live out short, painful lives there. However, Ani quickly discovers that she doesn't know the whole truth about the Scourge or the Colony. She's been caught in a devious plot, and, with the help of her best friend, Weevil, Ani means to uncover just what is actually going on.

But will she and Weevil survive long enough to do so?

The Scourge is an explosively thrilling tale of adventure and intrigue, courage and heart from New York Times bestselling author Jennifer A. Nielsen.

Praise For The Scourge…

"Fans of Nielsen's Ascendance trilogy will be clamoring for this new series. This genre mash-up of history, fantasy, and action/adventure is fast-paced and explores themes such as class struggles, familial ties, and the immorality of slavery." -- School Library Journal

"Should appeal to fans of... Suzanne Collins... [A] surefire mix of adventure, mystery, and suspense." -- The Horn Book
or support indie stores by buying on
Copyright © 2020 American Booksellers Association