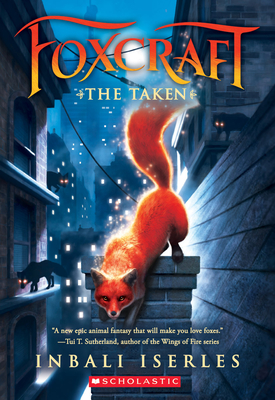 The first book in a thrilling fantasy trilogy starring one of the animal kingdom's most hunted heroes. Foxcraft is full of excitement and heart, and a touch of magic.
Isla and her brother are two young foxes living just outside the lands of the furless -- humans. The life of a fox is filled with dangers, but Isla has begun to learn mysterious skills meant to help her survive.

Then the unthinkable happens. Returning to her den, Isla finds it set ablaze and surrounded by strange foxes, and her family is nowhere in sight. Forced to flee, she escapes into the cold, gray world of the furless.

Now Isla must navigate this bewildering and deadly terrain, all while being hunted by a ruthless enemy. In order to survive, she will need to master the ancient arts of her kind -- magical gifts of cunning known only to foxes. She must unravel the secrets of foxcraft.

Praise For The Taken (Foxcraft, Book 1)…

"Iserles takes the actual habits and attributes of real foxes and mixes in magic and a complex social structure. Well-crafted fantasy of the furry kind." -- School Library Journal

"A new epic animal fantasy that will make you love foxes, see the furless in a whole new way, and wish you could use fox magic like slimmering, too. Perfect for fans of Warriors and Guardians of Ga'Hoole." -- Tui T. Sutherland, author of the Wings of Fire series

Inbali Iserles is an award-winning writer and an irrepressible animal lover. She is one of the team of authors behind the New York Times bestselling Survivors series, writing under the pseudonym of Erin Hunter. Her first book, The Tygrine Cat, won the 2008 Calderdale Children's Book of the Year Award. Together with its sequel, The Tygrine Cat: On the Run, it was listed among The Independent's "50 books every child should read."

Inbali attended Sussex and Cambridge Universities. For many years she lived in central London, where a fascination with urban foxes inspired her Foxcraft trilogy. She has recently moved to Cambridge with her family, including her principal writing mascot, Michi, who looks like an Arctic fox, acts like a cat, but is in fact a dog.
Loading...
or support indie stores by buying on