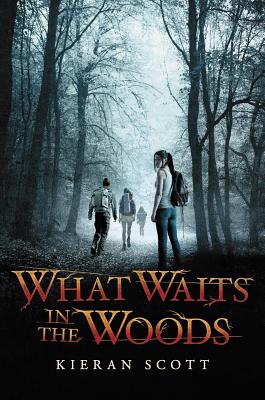 What Waits in the Woods

For city girl Callie Velasquez, nothing sounds more terrifying than a night out in the wilderness. But, wanting to bond with her popular new friends, Lissa and Penelope, she agrees to join them on a camping trip. At least Callie's sweet new boyfriend, Jeremy, will be coming too.
But nothing goes as planned. The group loses half their food supply. Then they lose their way. And with strange sounds all around her--the snap of a twig, a sinister laugh--Callie wonders if she's losing her mind.
Tensions swirl among the group, with dark secrets suddenly revealed. And then, things take a fatal turn: Callie stumbles upon a cold dead body in the woods.
Is the murderer close by, watching them? Callie has to figure out where she can turn and who she can trust, before her own life is at stake.
Kieran Scott weaves a thrilling mystery that explores love, loyalty--and the dangerous decisions we make in order to survive.

Kieran Scott is the author of several acclaimed young adult novels, including WHAT WAITS IN THE WOODS, the Cheerleader Trilogy, and the He's So / She's So Trilogy. She also wrote under the pen name Kate Brian the NEW YORK TIMES and USA TODAY bestselling series PRIVATE and PRIVILEGE. She lives with her husband and their son in New Jersey. Visit her online at www.kieranscott.net.
Loading...
or
Not Currently Available for Direct Purchase