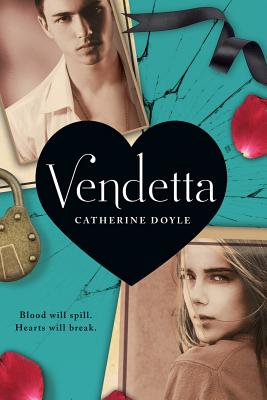 Blood Will Spill, Hearts Will Break: With a fierce rivalry raging between two warring families, falling in love is the deadliest thing Sophie could do. An epic debut set outside modern-day Chicago.

For Sophie, it feels like another slow, hot summer in Cedar Hill, waitressing at her family’s diner and hanging out with her best friend Millie. But then someone moves into the long-abandoned mansion up the block--a family of five Italian brothers, each one hotter than the last. Unable to resist caramel-eyed Nicoli, Sophie finds herself falling for him -- and willfully ignoring the warning signs. Why are Nic's knuckles cut and bruised? Why does he carry an engraved switchblade? And why does his arrogant and infuriating older brother, Luca, refuse to let her see him? As the boys' dark secrets begin to come to light, Sophie is confronted with stinging truths about her own family, too. Suddenly, she's torn between two warring dynasties: the one she’s related to and the one she's now in love with. She'll have to choose between loyalty and passione. When she does, blood will spill, hearts will break. Because in this twisted underworld, dishonor can be the difference between life and death.

"With its families at war and star-crossed lovers caught in the middle, Doyle's YA debut reads like a modern twist on Romeo and Juliet by way of The Sopranos." --Publishers Weekly

"Readers will most certainly swoon over Sophie and Nic's ill-fated romance with its stolen kisses and gazes liberally slathered with angst-y longing." --Kirkus Reviews

"Doyle's confident writing and Sophie's snarky yet relatable voice help sell the more over-the-top elements of this first in a romantic-suspense trilogy." --Booklist

"The conclusion to this story is an interesting twist . . . this book is highly readable. Sophie is a well-drawn, three-dimensional character, as are Luca and Nic." --VOYA

CATHERINE DOYLE lives in the west of Ireland. She holds a bachelor's degree in Psychology and a master's degree in English from the National University of Ireland, Galway. VENDETTA is her first novel.
Loading...
or
Not Currently Available for Direct Purchase