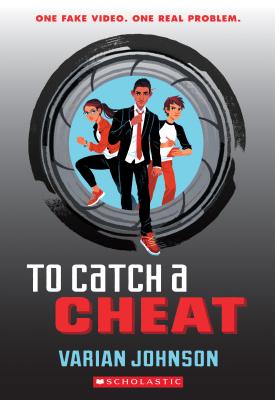 To Catch a Cheat (Paperback)

Jackson Greene is riding high. He is officially retired from conning, so Principal Kelsey is (mostly) off his back. His friends have great new projects of their own. And as he's been hanging out a lot with Gaby de la Cruz, he thinks maybe, just maybe, they'll soon have their first kiss.

Then Jackson receives a link to a faked security video that seems to show him and the rest of Gang Greene flooding the school gym. The thugs behind the video threaten to pass it to the principal -- unless Jackson steals an advance copy of the school's toughest exam.

So Gang Greene reunites for their biggest job yet. To get the test and clear their names, they'll have to outrun the school's security cameras, outwit a nosy member of the Honor Board, and outmaneuver the blackmailers while setting a trap for them in turn. And as they execute another exciting caper full of twists and turns, they'll prove that sometimes it takes a thief to catch a cheat.

Varian Johnson is the author of several novels for children and young adults, including The Great Greene Heist, which was an ALA Notable Children’s Book, a Kirkus Reviews Best Book of 2014, and a Texas Library Association Lone Star List selection, and To Catch a Cheat, another Jackson Greene adventure and a Kids’ Indie Next List pick. He lives with his family near Austin, Texas. You can find him on the web at www.varianjohnson.com and @varianjohnson.

Praise for To Catch a Cheat:

"Readers will have a great time picking up allusions to 'Star Wars,' 'Star Trek,' superheroes and 'Ocean's Twelve' as they follow an intiguingly twisty plot... Here's hoping Gang Greene returns soon in another adventure that surprises, delights and expands the possibilities of the caper mystery." -- The Washington Post

"This sequel is even better than the first book... It has more depth and character development, and the plot is complex and engaging... Those who enjoy realistic fiction with action, mystery, and humor will have a hard time putting this novel down." -- School Library Journal


Praise for The Great Greene Heist:

"It's a thrilling ride that may con reluctant readers into settling down on the couch with books like The Great Greene Heist instead of the remote control." -- The New York Times

* "It's refreshing to read a story about middle-school life that's smart, complicated, and funny, with a cleverly constructed plot and a sweet relationship between a boy and a girl. ... The lively (and racially diverse) cast of characters and the intricate plot will make this a story to read again for the sheer fun of it all." -- The Horn Book Magazine, starred review

* "The elaborate bait and switch of this fast-paced, funny caper novel will surprise its readers as much as the victims." -- Kirkus Reviews, starred review

"Like all entertaining heist tales, The Great Greene Heist assembles a motley crew of characters, each with their own specialty. . . . Varian Johnson keeps the pace lively and the 'Star Trek references flying." -- Austin American-Statesman
or support indie stores by buying on
Copyright © 2020 American Booksellers Association