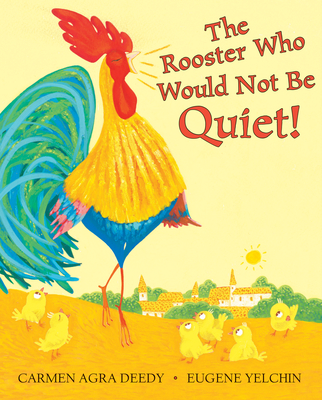 The Rooster Who Would Not Be Quiet!

La Paz is a happy, but noisy village. A little peace and quiet would make it just right.
So the villagers elect the bossy Don Pepe as their mayor. Before long, singing of any kind is outlawed. Even the teakettle is afraid to whistle!

But there is one noisy rooster who doesn't give two mangos about this mayor's silly rules. Instead, he does what roosters were born to do.

Carmen Deedy's masterfully crafted allegory and Eugene Yelchin's bright, whimsical mixed-media paintings celebrate the spirit of freedom -- and the courage of those who are born to sing at any cost.

Praise For The Rooster Who Would Not Be Quiet!…

Praise for The Rooster Who Would Not Be Quiet!:

* "Deedy's original tale about standing up to oppression couldn't be more timely. Yelchin's saturated, folksy, mixed-media paintings are the perfect partner, fleshing out the characterizations and offering visual humor. This subtle, modern multicultural tale is a must have." -- Kirkus Reviews, starred review

* "Deedy uses repeating language to powerful effect, ramping up the stakes while underscoring the gallito's steady determination....Yelchin amplifies themes of protest and injustice in vivid mixed-media caricatures that emphasize the rooster's humble nobility in contrast to Don Pepe's sneering autocratic airs. Like the gallito's cries of 'kee-kee-ree-kee!' Deedy's message about speaking up and speaking out rings as clearly as a bell." -- Publishers Weekly, starred review

* "Deedy's original story of the noisy village of La Paz has the feel of a well-told folktale–one with plenty of dry wit... Bright hues and busy page layouts reflect a boisterous La Paz but fade to dull blues and open space when Don Pepe comes into power. Following the narrative arc, the color and energy return with the gallito's arrival and resistance. The story closes with an inspiring author's note encouraging readers and listeners to make themselves heard." --The Horn Book, starred review

"Told with a storyteller's flair, the narrative reads like a folktale, while Yelchin's mixed-media illustrations are vibrant and perfectly suit the text. VERDICT A fun read-aloud for any library, especially ones looking for stories with Hispanic influence." -- School Library Journal


Praise for 14 Cows for America by Carmen Deedy; illustrated by Thomas Gonzalez:

* "A stirring, heartwarming tale that made headlines when it happened and is now, thankfully, preserved on the page for children." -- Kirkus Reviews, starred review

"A moving tale of compassion and generosity." -- Publishers Weekly


Praise for The Yellow Star: The Legend of King Christian X of Denmark by Carmen Deedy; illustrated by Henri Sorensen:


Praise for Martina the Beautiful Cockroach: A Cuban Folktale:

"This telling has magic all its own." -- Kirkus Reviews

Carmen Agra Deedy is one of America’s foremost storytellers. Her many award-winning books include Martina the
Beautiful Cockroach, which received a Pura Belpre Honor, and her New York Times bestseller 14 Cows for America. Born in Havana, Cuba, Carmen drew on her love of folklore to create The Noisy Little Rooster. She lives with her family in Atlanta, Georgia. Visit Carmen at www.carmenagradeedy.com.

Eugene Yelchin loves to create books that explore the boundaries of universal truth. He is the author and illustrator of the Newbery Honor book Breaking Stalin’s Nose, as well as the illustrator of many distinguished, award-winning picture books. These include Won Ton: A Cat Tale Told in Haiku by Lee Wardlaw, and Elephant in the Dark, retold by Mina Javaherbin. Born in Russia, Eugene now lives in Topanga, California, with his wife and their two children. Visit him at www.eugeneyelchinbooks.com.
Loading...
or support indie stores by buying on