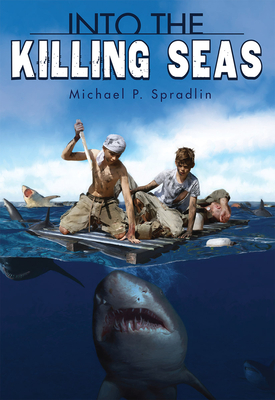 Into the Killing Seas

When the ship goes down, the sharks come out....Stranded in the war torn Pacific, Patrick and his younger brother Teddy are finally homeward-bound. They've stowed away on one of the US Navy's finest ships, and now they just need to stay hidden. But Japanese torpedoes rip their dream apart.And the sinking ship isn't the worst of it. Patrick and Teddy can handle hunger and dehydration as they float in the water and wait to be rescued. If they're smart, they can even deal with the madness that seems to plague their fellow survivors. No, the real danger circles beneath the surface. And it has teeth....Based on the true events of the 1945 sinking of the USS Indianapolis, author Michael P. Spradlin tells a harrowing story of World War II.

Michael P. Spradlin is a New York Times bestselling author. His books include Into the Killing Seas, the Youngest Templar trilogy, the Wrangler Award Winner Off Like the Wind! The First Ride of the Pony Express, and several other novels and picture books. He holds a black belt in television remote control and is fluent in British, Canadian, Australian, and several other English-based languages. He lives in Lapeer, Michigan. Visit him online at michaelspradlin.com.
Loading...
or
Not Currently Available for Direct Purchase