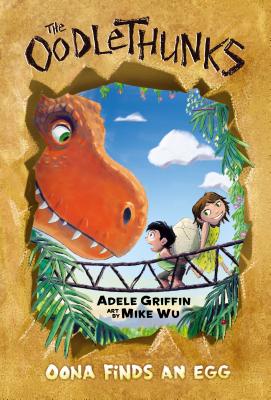 Oona Finds an Egg (The Oodlethunks #1)

Oona has found a very special egg. Oh, how she loves her baby! She'll do anything to protect this egg until it hatches. Then she can find out what's inside, even though it might just gobble her up! But Oona's precious bundle of eggy joy may never see the light of day. It seems everyone wants Oona's egg. Her little brother, Thunk, that smelly kid, Bruce Brute, and a bunch of others in her West Wog world all want a piece of Oona's treasure. Oona the protector, Oona the curious, Oona the mighty will do whatever it takes to safeguard her darling. No one will get their grimy, Cro-Magnony hands on her egg. Because, more than anything, Oona wants something of her very own to care for.

National Book Award finalist Adele Griffin pairs with artist Mike Wu to deliver a cast of lovable, primitive family and friends in West Wog. The stories pop with adventure, original language, and an unstoppable protagonist who is as adorable as the egg she's working so hard to protect.

Adele Griffin is the highly acclaimed author of numerous books for middle grade and young adult readers. Her novels Sons of Liberty and Where I Want to Be are both National Book Award finalists. Her popular Witch Twins and Vampire Island series have each been made into Disney movies. Adele’s thriller Loud Awake and Lost was hailed by Booklist as “exquisite” in a starred review. She lives in Brooklyn, New York, with her husband and two children.

Mike Wu is a top animator, working first for Walt Disney and then Pixar Studios, where he animated such Oscar winners as The Incredibles and Toy Story 3, among others, including Brave, Ratatouille, and Up. He is also the co-founder of Tiny Teru, a baby and toddler boutique featuring all hand-drawn items. Mike lives in Southern California with his family.
or support indie stores by buying on