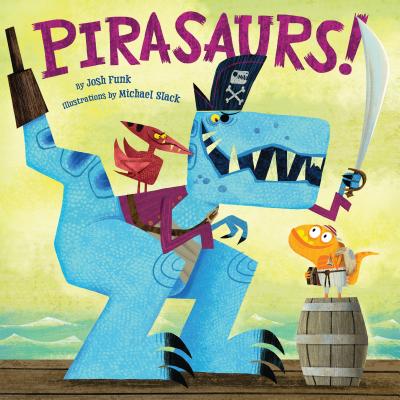 Meet the Pirasaurs, a ragtag team of seasoned pirate dinosaurs looking for adventure and treasure! There's fearsome Captain Rex, golden-toothed Velocimate, one-eyed Bronto Beard, and more fearsome, buccaneering beasts....as well as one new recruit who may be small, but who's eager to prove he can learn the ropes and find his place on the team.

But when a trap is set upon the Pirasaurs while looking for buried treasure, it's up to the littlest recruit to show the team that there's more to a Pirasaur than meets the eye patch!

“Prehistoric pirates are always worth a play, as is the peaceable theme…” - Kirkus

Praise for Josh Funk
"When I was a kid my best friend was Josh Funk. I think he's about to become a friend to a whole new generation of kids." - B.J. Novak, author of #1 New York Times Bestseller The Book with No Pictures

Praise for Michael Slack's Elecopter
"The author of Monkey Truck (Holt, 2011) takes his characters to the skies with the highly versatile and helpful Elecopter, an elephant blessed with the main rotor, tail rotor, and landing skids of a helicopter." -- School Library Journal

"Ahh! The cuteness! It blinds! Well, that's what you get when you take a rotund, big-eyed baby elephant, give her landing gear and helicopter blades, and send her into the savanna to save animals. Kids will instinctively get it and probably love it." -- Booklist

Josh Funk grew up in New England and studied Computer Science in school. Today, he still lives in New England and when not writing Java code or Python scripts, he drinks Java coffee and writes picture books like Lady Pancake and Sir French Toast. Pirasaurs! is his first book with Scholastic. Josh lives with his wife, children, and assorted pets and monsters in Massachusetts.

Michael Slack is an artist, illustrator, and character designer. His humorous, character-driven art can be found in books, magazines, and on television. He has written and illustrated many books for children, including Monkey Truck and Elecopter as well as Nugget and Fang: Friends Forever—or Snack Time? written by Tammi Sauer and Pass It On written by Marilyn Sadler. He lives in Northern California with his wife, daughter, and a dog named Iggy Pup.
Loading...
or
Not Currently Available for Direct Purchase