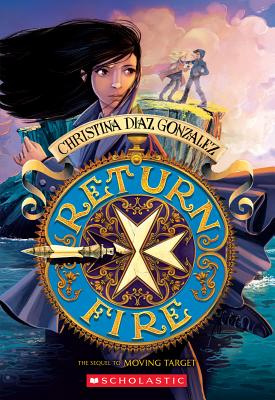 The thrilling sequel to Moving Target! When a young girl can determine the destiny of the world, the wrong choice could lead to disaster...WHO WILL CONTROL DESTINY?Cassie Arroyo has the ability to use the Spear of Destiny. And despite knowing the dangers of such a powerful object, she uses it to shape the future and save her father's life.The consequences of that small choice are larger than Cassie could ever have imagined. It produced a chain reaction - and now, in her visions of the future, Cassie sees chaos and death spreading across Rome.With the help of her friend Asher, Cassie is determined to fix the future she's created . . . but it's not going to be simple. The spear's been stolen by people who want to use it for their own dark purposes.Can Cassie recapture the spear before it's used against her? And will she be able to undo the harm she's caused, or will she only cast the world into greater chaos? Christina Diaz Gonzalez's Return Fire is a nonstop, action-packed adventure, full of mystery and intrigue, that will take you on a wild and wonderful ride across Italy.

Praise for Return Fire, the sequel to Moving Target:"Readers will root for Cassie and stay with her to the nail-biting end." -- Kirkus ReviewsPraise for Moving Target:"A grand adventure! The spunky heroine must decipher riddles, follow clues, and make life-or-death decisions. An exciting and entertaining adventure... that will keep readers engaged until the cliffhanger ending and leave them waiting for the next book." -- Kirkus Reviews"Gonzalez has created an action-packed mystery... A cliff-hanger ending will keep readers anxiously awaiting the next installment. Fans of Jude Watson's Loot and Chris Grabenstein's Escape from Mr. Lemoncello's Library will devour this series opener." -- School Library Journal"Moving Target is a story with so much of what I love: secret history, ancient relics, a breathtaking pace, and characters I can't help but root for." -- Matthew J. Kirby, Edgar Award-winning author of Icefall"Christina Diaz Gonzalez weaves a tight, twisty, heart-in-your-throat adventure that delivers thrill after thrill." -- Jude Watson, author of Loot

Christina Diaz Gonzalez is the award-winning author of Moving Target, The Red Umbrella and A Thunderous Whisper. Her books have received numerous honors and recognitions including the Florida Book Award and the Nebraska Book Award. They have also been named the American Library Association's Best Fiction for Young Adults, a Notable Social Studies Trade Book for Young People, and the International Reading Association's Teachers' Choice. Learn more at christinagonzalez.com.
Loading...
or support indie stores by buying on
(This book is on backorder)