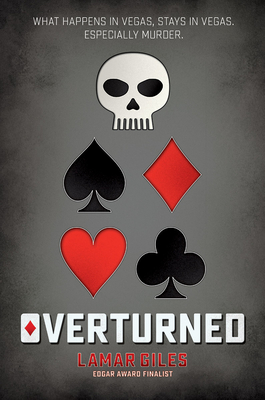 Nikki Tate is infamous, even by Las Vegas standards. Her dad is sitting on death row, convicted of killing his best friend in a gambling dispute turned ugly. And for five years, he's maintained his innocence. But Nikki wants no part of that. She's been working on Operation Escape Vegas: playing in illegal card games so she can save up enough money to get out come graduation day.Then her dad's murder conviction is overturned. The new evidence seems to come out of nowhere and Nikki's life becomes a mess when he's released from prison. Because the dad who comes home is not the dad she remembers. And he's desperately obsessed with finding out who framed him--and why.As her dad digs into the seedy underbelly of Vegas, the past threatens everything and Nikki is drawn into his deadly hunt for the truth. But in the city of sin, some sinners will do anything to keep their secrets, and Nikki soon finds herself playing for the biggest gamble ever--her life.

Praise for Overturned
"An utterly compelling whodunit." --Kirkus Reviews (starred review)
"Giles once again spins a twisting, involving mystery played out among a diverse cast, and again race plays a cunning hand, with the African-American Tate family painfully aware that Nate's conviction had as much to do with his identity as evidence…[A]nother Giles winner." --BCCB
"A fast-paced, endlessly intriguing mystery." --Booklist
"A fast-paced, compelling mystery." --School Library Journal
"Giles, a founding member of We Need Diverse Book, has written a fast-paced mystery." --VOYA
"Giles excels at pulpy crime drama, including a romance with a wealthy casino heir, scattering a trail of clues and bluffs to keep readers guessing." --Publishers Weekly
"Giles, a founding member of We Need Diverse Books and two-time Edgar Award finalist, is in top form, weaving together the threads of his whodunit-and-why and resonantly depicting his characters’ home and school lives. As a poker genius Nikki may be a singular sort of teenager, but she’s grounded in desires and motivations that make her story as moving as it is thrilling." --New York Times Book Review