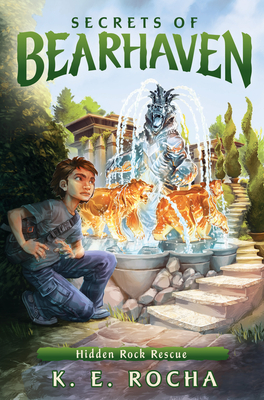 Ever since Spencer Plain's parents disappeared, he's been staying in Bearhaven--a secret city where bears talk, go to school, develop secret technology, and plan missions to rescue others who need help.

Spencer's been planning, too. He's in training as an operative with the Bear Guard, so that he's ready to go help rescue his parents. They've been captured by Pam, who runs an illegal ring of rare animal trading and has been training an army of bears under his control. The Plains are being held at the Hidden Rock Zoo, which is Pam's formidable, fortress-like base.

Spencer and the team will have to sneak in, find his parents in the maze of the zoo, and make their escape. Or at least that's the plan. But when it starts to go wrong and Spencer and Aldo are cut off from the rest of the team, it will take some fast thinking, some serious stealth, and a lot of teamwork to get everyone out safe!

Praise for Secrets of Bearhaven:

"The action reaches an exciting climax with this daring rescue attempt, which, in conjunction with short chapters and the fast-paced plot, will have readers breathlessly turning pages. Although talking animal books are far from unusual, Rocha adds a unique spin to the genre in the creation of the fantastical Bearhaven... A solid purchase for fans of animal adventure stories and eco-mysteries, this work will also appeal to reluctant readers." -- School Library Journal

"The action never flags... a fun, exciting series start with creepy villains and a boy hero who outthinks and outwits the adults" -- Booklist

K. E. Rocha is the author of Secrets of Bearhaven, developed in collaboration with Egg in the Hole Productions. She received a BA in English from Trinity College, an MFA from New York University, and was named a Connecticut Circuit Student Poet by the Connecticut Poetry Society. She has never visited with talking bears, although she often talks to her goofy little hound dog, Reggie, while writing from her studio in Queens, New York.
or support indie stores by buying on