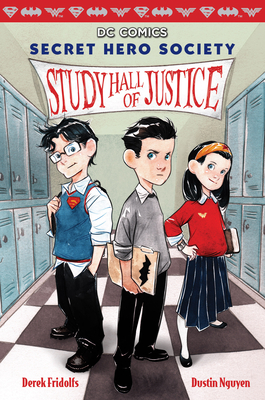 The team behind DC Comics LIL' GOTHAM takes readers to the halls of Ducard Academy in Gotham City, where a young Batman, Superman, and Wonder Woman start their very own Junior Detective Agency!Young Bruce Wayne is the new kid at Ducard Academy, a prep school for gifted middle school students. Bruce finds out pretty quickly that he doesn't fit in: the faculty seems to not just encourage villainous behavior from its students, but reward it. He makes friends with two other outsiders, farm boy Clark Kent and the regal Diana Prince. The three band together to form a detective squad to find out why all of these extraordinary kids have been brought together at Ducard Academy, and to see just what the faculty is plotting. An all-new series from the Eisner-nominated team behind Batman Lil' Gotham (Dustin Nguyen and Derek Fridolfs), Secret Hero Society uses comics, journal entries, and doodles to reimagine Batman, Superman, and Wonder Woman as three students in the same school. They'll try their best to solve their case, but just because you're faster than a speeding bullet, more powerful than a locomotive, or an Amazonian princess, it doesn't mean you get to stay up past eleven.

Derek Fridolfs is a New York Times bestselling author. With Dustin Nguyen, he cowrote the Eisner-nominated Batman: Li'l Gotham. He's also written and worked on such comics series as Batman: Arkham City Endgame with Paul Dini, Detective Comics, Legends of the Dark Knight, Adventures of Superman, Sensation Comics Featuring Wonder Woman, Catwoman, Zatanna, JLA, Justice League Beyond, and comics based on the cartoons for Adventure Time, Regular Show, Clarence, Pig Goat Banana Cricket, Dexter's Laboratory, Teenage Mutant Ninja Turtles, Teen Titans Go, Looney Tunes, and Scooby-Doo Where Are You! He's written several chapter books for Capstone based on the Justice League.
Dustin Nguyen is a New York Times bestselling and Eisner Award-winning American comics creator. His body of work includes Batman: Li'l Gotham, which he cocreated, and numerous DC, Marvel, Dark Horse, and Boom! titles along with DC Comics Secret Hero Society and Image Comics' Descender and Ascender, both of which he cocreated. He lives in California with his wife, Nicole; their two kids, Bradley and Kaeli; and dog, Max. His first children's picture book, titled What Is It?, was written by his wife (at the age of 10) and is their first collaboration together. He enjoys sleeping and driving.
Loading...
or support indie stores by buying on