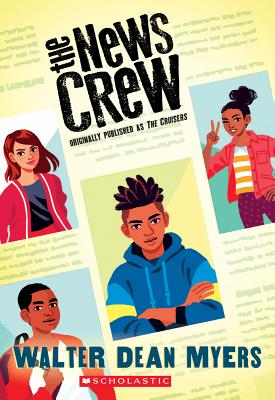 The Cruisers (The News Crew, Book 1)

School is hard enough, but when you're misfits on a mission, you're really put to the test. The re-launch of a popular middle-grade series by Walter Dean Myers.

Zander and his crew are underdogs at DaVinci Academy, one of the best Gifted and Talented schools in Harlem. But even these kids who are known as losers can win by speaking up. When they start their own school newspaper, stuff happens. Big stuff. Loud stuff. Stuff nobody expects. Mr. Culpepper, the Assistant Principal and Chief Executioner, is ready to rid of Zander, Kambui, LaShonda, and Bobbi - until they prove that their writing packs enough power to keep the peace and show what it means to stand up for a cause.

Praise For The Cruisers (The News Crew, Book 1)…

"Readers will look forward to further tales of these kids as they navigate the high seas of middle school life." -- Kirkus Reviews

"The Cruisers are a thoughtful, mouthy bunch . . . watch them set off metaphorical fireworks . . ." -- The Bulletin of the Center for Children's Books