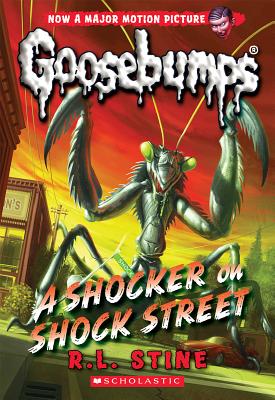 The original series from the Master of Fright--now a major motion picture in theaters October 16, 2015!The original books featuring the scariest creatures from the Goosebumps movie, in theaters October 16, 2015!Erin Wright and her best friend, Marty, love horror movies. Especially Shocker on Shock Street movies. All kinds of scary creatures live on Shock Street. The Toadinator. Ape Face. The Mad Mangler.But when Erin and Marty visit the new Shocker Studio Theme Park, they get the scare of their lives. First their tram gets stuck in The Cave of the Living Creeps. Then they're attacked by a group of enormous praying mantises!Real life is a whole lot scarier than the movies. But Shock Street isn't really real. Is it?