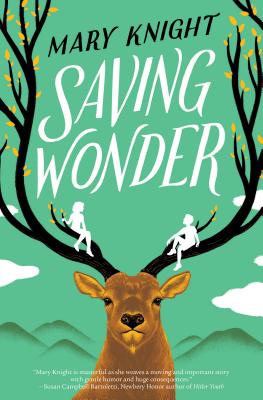 In this utterly transporting debut about the power of words, the importance of friendship, and the magic of wonder, Curly Hines must decide whether to fight to save the mountain he calls home.
Having lost most of his family to coal mining accidents as a little boy, Curley Hines lives with his grandfather in the Appalachian Mountains of Wonder Gap, Kentucky. Ever since Curley can remember, Papaw has been giving him a word each week to learn and live. Papaw says words are Curley's way out of the holler, even though Curley has no intention of ever leaving.

When a new coal boss takes over the local mining company, life as Curley knows it is turned upside down. Suddenly, his best friend, Jules, is interested in the coal boss's son, and worse, the mining company threatens to destroy Curley and Papaw's mountain. Now Curley faces a difficult choice. Does he use his words to speak out against Big Coal and save his mountain, or does he remain silent and save his way of life?

From debut author Mary Knight comes a rich, lyrical, and utterly transporting tale about friendship, the power of words, and the difficult hurdles we must overcome for the people and places we love.

"Knight delivers a strong environmental message and a language lesson in her debut novel... Readers will feel Curley's sorrow and cheer him on during his campaign to save what he loves most. Knight frankly addresses the reality of harsh changes, but Curley's spirit, moving people inside and outside the community to act, is inspirational." -- Publishers Weekly

Mary Knight has lived in many wondrous places -- Traverse City, Michigan, and Whidbey Island, Washington, among them. She and her husband now reside in Lexington, Kentucky, where she enjoys living in the rolling green hills of horse country, exploring the Appalachian Mountains to the east, and watching University of Kentucky basketball. Most of all, she cherishes time with friends and family, who add great wonder to her life. Saving Wonder is her debut novel.
Loading...
or
Not Currently Available for Direct Purchase