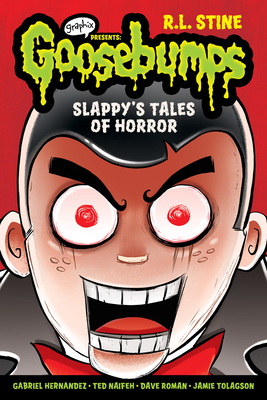 Four Goosebumps Graphix tales by master of horror R. L. Stine are adapted into full-color comics and feature a brand-new Slappy story by bestselling author, Dave Roman.The talented Dave Roman creates the horrifying drawings for "The Night of the Living Dummy," the origin story about that most evil of all ventriloquist dummies, Slappy!In "A Shocker on Shock Street," Jamie Tolagson captures the chilling tale of a brother and sister doing their dream job: testing rides in a movie studio theme park, where the special effects are REALLY special.With his shadowy illustrations, Gabriel Hernandez creates the perfect atmosphere in "The Werewolf of Fever Swamp," a spooky story about a boy and his dog who go sniffing around in a lonely swamp . . . and wish they hadn't.Ted Naifeh is at his creepy best in "Ghost Beach," a scary ghost story about a brother and sister who investigate a local legend and discover a terrible secret about their family.

Ted Naifeh is the author and illustrator of many acclaimed graphic novels, including Polly and the Pirates, Courtney Crumrin and the Night Things, and Courtney Crumrin Tales: Portrait of the Warlock as a Young Man. He has also illustrated the popular Death Jr. and Gloomcookie series.
Dave Roman is the author/illustrator of the Astronaut Academy series. He is the co-author of two New York Times bestselling graphic novels, X-MEN: MISFITS and THE LAST AIRBENDER: ZUKO'S STORY. He lives in Astoria, New York.
R.L. Stine is the creator of the bestselling Goosebumps series, which has more than 400 million copies in print worldwide and celebrated 25 years in 2017. Goosebumps is one of the bestselling children's series of all-time and inspired a popular television show, as well as a feature film starring Jack Black that opened at #1 at the box office. His other popular children's books include the series Fear Street, Mostly Ghostly, The Nightmare Room, and Rotten School, and his first picture book, with Marc Brown, The Little Shop of Monsters. R.L. Stine lives in New York City. You can connect with him on Twitter at @RL_Stine or Facebook: facebook.com/rlstine. For more information, visit rlstine.com and www.scholastic.com/goosebumps.