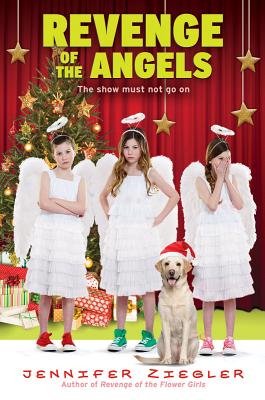 Revenge of the Angels

The Brewster triplets, Dawn, Darby, and Delaney, usually love Christmas. Decorations, singing carols, seeing Aunt Jane and their favorite neighbors, hot cocoa, and presents--what could be better? But this year nothing is going right, starting with their local Christmas pageant. They practiced looking wise and stroking fake beards so they could play the three Wise People, but what did they get cast as? Angels - and just because they're girls! Totally not fair.

And things are going from bad to worse. No Aunt Jane, no megaphone, no Mom or Lily because of the snow--and someone is stealing decorations (and baked goods!) from their neighbors' houses. The girls don't want this to be the worst Christmas ever, but can they fix the pageant, solve the mystery, find their dad a new couch (it's a long story), and recover their holiday cheer?

Praise For Revenge of the Angels…

Praise for Revenge of the Flower Girls

"[A] lively, warmhearted story of family, loyalty, and the sacred bonds of sisters." -- Publishers Weekly

Like the Brewster triplets, Jennifer Ziegler is a native Texan and a lover of family, history, barbecue, and loyal dogs. Although she only has one sister, she does know what it is like to have four kids living in the same house. She is the author of several books for young people, including Sass & Serendipity, and How Not to Be Popular. Jennifer lives in Austin, Texas with her husband, author Chris Barton, and their four children.
or
Not Currently Available for Direct Purchase