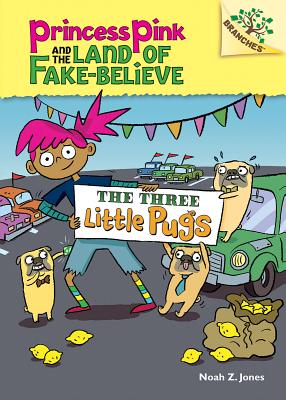 Princess Pink has to shut down a shady car dealership run by the Three Little Pugs!

In the Land of Fake-Believe, Princess Pink meets the Three Little Pugs--the trickiest car dealers in town. They sold Scaredy-Pants Wolf an actual lemon instead of a car! Princess and her friend Moldylocks must work together to get their friend his money back. Princess will have to use her new karate moves to block, chop, and kick down this shady business for good!

Praise For The Three Little Pugs: A Branches Book (Princess Pink and the Land of Fake-Believe #3)…

Praise for Moldylocks and the Three Beards:


* "Jones takes 'The Three Bears' for a dizzy spin in this laff-riot series opener.... Being cast against both genre type and publishers' convention, Princess likes 'dirty sneakers, giant bugs, mud puddles, monster trucks, and cheesy pizza' far more than fairies, princesses or anything pink, and she also (for a wonder) has dark skin in the cartoon illustrations.... Fledgling readers will agree with Princess' bemused comment: 'This Land of Fake-Believe is crazy-cakes!'" -- Kirkus Reviews, starred review

"The story...will have kids guffawing with the silly puns and cheering for the ingenious Princess Pink in this subverted version of the more traditional tale." -- Bulletin of the Center for Children's Books

An Amazon Best Book of the Month, September 2014

Noah Z. Jones is an author, illustrator, and animator who creates all sorts of zany and memorable characters. He has illustrated numerous books for children, including ALWAYS IN TROUBLE, NOT NORMAN, and THOSE SHOES. He is also the author and illustrator of PRINCESS PINK AND THE LAND OF FAKE BELIEVE, an early chapter book series. He lives in California. To see more of his work, visit www.noahzjones.com.
Loading...
or
Not Currently Available for Direct Purchase