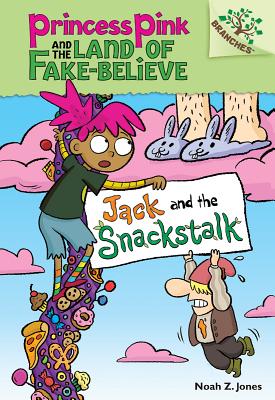 Princess heads to Moldylocks's house for movie night. Moldy's cousin Jack comes, too. He brings pink jelly beans for a snack. But Princess doesn't like pink, so she throws the jelly beans out the window. Soon, the beans sprout into a huge pillar of snacks! The three friends climb up the snackstalk and find themselves in Snackland! It is filled with pizza-roll hills, nacho-cheese rivers, and there's even a golden egg roll in a snack-filled castle! The problem is there's also a GIANT in that castle! Will Princess and her friends ever escape Snackland?

Praise For Jack and the Snackstalk: A Branches Book (Princess Pink and the Land of Fake-Believe #4)…

Praise for Moldylocks and the Three Beards:


* "Jones takes 'The Three Bears' for a dizzy spin in this laff-riot series opener.... Being cast against both genre type and publishers' convention, Princess likes 'dirty sneakers, giant bugs, mud puddles, monster trucks, and cheesy pizza' far more than fairies, princesses or anything pink, and she also (for a wonder) has dark skin in the cartoon illustrations.... Fledgling readers will agree with Princess' bemused comment: 'This Land of Fake-Believe is crazy-cakes!'" -- Kirkus Reviews, starred review

"The story...will have kids guffawing with the silly puns and cheering for the ingenious Princess Pink in this subverted version of the more traditional tale." -- Bulletin of the Center for Children's Books

An Amazon Best Book of the Month, September 2014

Noah Z. Jones is an author, illustrator, and animator who creates all sorts of zany and memorable characters. He has illustrated numerous books for children, including Always in Trouble, Not Norman, and Those Shoes. He is also the author and illustrator of Princess Pink and the Land of Fake-Believe, an early chapter book series. He lives in California. To see more of his work, visit www.noahzjones.com.
Loading...
or
Not Currently Available for Direct Purchase