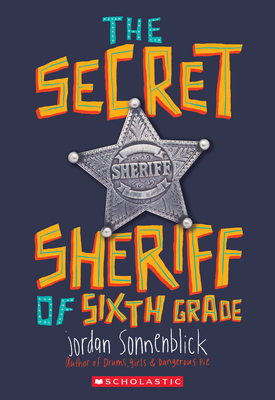 The Secret Sheriff of Sixth Grade

A new hilarious, honest, and inspirational middle-grade novel about finding your inner hero, from the author of Drums, Girls & Dangerous Pie.
In sixth grade, bad things can happen to good kids. Bullies will find your weakness and jump on it. Teachers will say you did something wrong when really you didn't mean to do anything wrong. The kids who joke the loudest can drown out the quieter, nicer kids.

Maverick wants to change all that. One of the last things his father left him was a toy sheriff's badge, back when Maverick was little. Now he likes to carry it around to remind him of his dad -- and also to remind him to make school a better place for everyone . . . even if that's a hard thing to do, especially when his own home life is falling apart.

The Secret Sheriff of Sixth Grade is a story about standing up for yourself -- and being a hero at home and in the halls of your school.

Praise For The Secret Sheriff of Sixth Grade…

Praise for The Secret Sheriff of Sixth Grade:

"Sonnenblick creates in Maverick an endearing protagonist to root for. Despite daunting obstacles, this terrific boy retains a strong sense of self, a sense of humor, and a big heart that impels him to do what's right, as when he defends his archnemesis." -- Kirkus Reviews

"[A] winning formula...a child in crisis, lots of humorous situations and one-liners, and moments of genuine warmth and emotion." -- Horn Book


Praise for After Ever After:

* "As hilarious as it is tragic, and as honest as it is hopeful, don't confuse this book with inspirational reading. It's irresistible reading." -- Booklist, starred review

"Told with Sonnenblick's trademark self-deprecating humor, this stand-alone tween narrative slots neatly into the space between the author's YA and J titles, sensitively dealing with issues of family, friendship and death in a way that will appeal to middle-grade students. Recommended for fans and new readers alike." -- Kirkus Reviews

"A brave book . . . Jordan Sonnenblick carries it off with such charm and elan, you forget for a moment your heart is breaking." -- Frank McCourt, author of Angela's Ashes

* "Sonnenblick shows that even in the midst of tragedy, life goes on, love can flower, and the one thing you can always change is yourself." -- Booklist, starred review

"The reader falls in love with the brothers, laughing and crying by turns and rooting for both of them until it almost hurts." -- Kirkus Reviews

Jordan Sonnenblick is the author of the acclaimed Drums, Girls & Dangerous Pie, Notes from the Midnight Driver, Zen and the Art of Faking It, and the sequel to Drums called After Ever After. He lives in Bethlehem, Pennsylvania, with his wife and two children.
or support indie stores by buying on