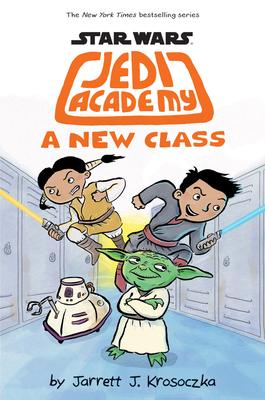 "A New Class" arrives in the fourth episode of Star Wars® Jedi Academy! There are some new faces and old, but the amount of laughs and fun is still the same!Victor Starspeeder is psyched to be starting school at the Jedi Academy. His sister, Christina does not share an enthusiasm for Victor's newfound educational path. She's horrified that her annoying baby brother will be there to cramp her style.While Victor means well, his excess energy leads him to spend a lot of time in detention with the little, green sage, Yoda. Yoda wants to channel Victor's talents, so he makes the young Padawan join the drama club. Victor is not pleased. "Learn to control your anger, you must! Successfully manage their emotions, a good Jedi can. Box step and jazz hands ... hee hee ... young Padawan will!"Victor will have to make new friends, get on his sister's good side, learn to use the force, and hope the year's drama club performance ("Wookiee Side Story"? "Annie Get Your Lightsaber"?) goes off without a hitch!

Jarrett J. Krosoczka has been passionate about storytelling through words and pictures since he was a kid. He began his professional career by illustrating educational readers for a national publisher while still an undergraduate at Rhode Island School of Design. Then, just six months after graduation, Jarrett received his first contract for a trade book that he authored. Knopf Books for Young Readers published Good Night, Monkey Boy on June 12, 2001 and Jarrett hasn't stopped or slowed down since.

Jarrett is a two-time winner of the Children's Choice Book Award for the Third to Fourth Grade Book of the Year and is the author and/or illustrator of more than twenty-five books for young readers. His work includes several picture books, the Lunch Lady graphic novels and Platypus Police Squad middle-grade novel series. Jarrett has given two TED Talks, both of which have been curated to the main page of TED.com and have collectively accrued nearly two million views online. He is also the host of The Book Report with JJK on SiriusXM's Kids Place Live, a weekly segment celebrating books, authors and reading. His work has been featured on the front page of The Boston Globe and on NPR's All Things Considered. Jarrett's books have also been recommended by national publications such as Newsweek, The New York Times and USA Today. His Punk Farm picture book and Lunch Lady series are both currently in development as feature films. Jarrett lives in Western Massachusetts with his wife and two daughters, and their pugs.