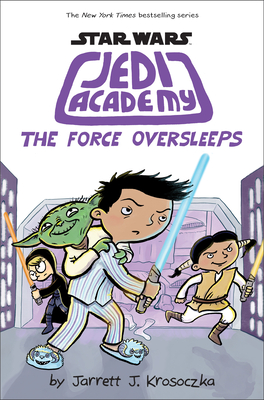 Victor Starspeeder is back in action with more lightsabers, space races, and middle school escapades in the newest volume of the bestselling series "Star Wars: Jedi Academy"! Victor Starspeeder is back at Jedi Academy for year two, but it's not going the way he'd planned. He was thrilled about Drama Club and hoped to get the lead in this year's musical... But a new kid got the role! What gives?! Plus, he keeps oversleeping and getting to class late . . . Worst of all, his big sister Christina is getting ready to graduate from Jedi Academy, and there are rumors going around that she's a Sith! What's a Padawan to do? In times when he feels more alone than ever, Victor will have to trust the ways of the Force and his friends if he's going to survive year two in this all-new chapter in the Jedi Academy series.

Jarrett J. Krosoczka is a New York Times bestselling author, two-time winner of the Children’s Choice Book Award for the Third to Fourth Grade Book of the Year, an Eisner award nominee, and is the author and/or illustrator of more than thirty books for young readers. His work includes several picture books, select volumes of Star Wars: Jedi Academy, the Lunch Lady graphic novels, and Platypus Police Squad novel series. Jarrett has given two TED Talks, both of which have been curated to the main page of TED.com and have collectively accrued more than two million views online. He is also the host of The Book Report with JJK on SiriusXM’s Kids Place Live, a weekly segment celebrating books, authors, and reading.
Jarrett lives in Western Massachusetts with his wife and children, and their pugs, Ralph and Frank.
Loading...
or support indie stores by buying on