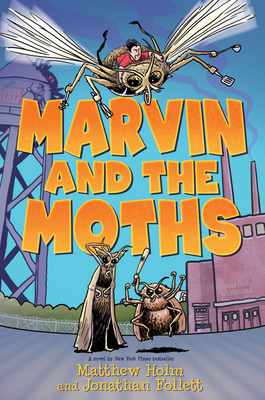 Marvin and the Moths

Middle school is off to a rocky start for Marvin Watson. Doomed to misfit status, his only friends are a girl with major orthodontics, the smelliest boy in school, and the trio of sarcastic man-sized moths that live in his attic.

No one said middle school would be easy! Also, no one said that Marvin's town would be threatened by mutant bugs, including a very hungry, Shakespeare-quoting spider. But life in the suburbs is full of surprises. Will Marvin be the one to unravel the mystery behind the mutants and save the town? Or will he be too busy with the real threat: his first school dance?!

This hilarious send-up of middle school has the humor of James Patterson's I Funny, the underdog hero of Diary of a Wimpy Kid, and the zany action of NERDS... and features illustrations by co-author Matthew Holm, New York Times bestselling illustrator of Babymouse, Squish, and Sunny Side Up.

Praise For Marvin and the Moths…

Praise for Sunny Side Up:

*"In the hands of the sibling creators of Babymouse and Squish, even a story inspired by troubling circumstances in their own mid-1970s childhoods offers hilarious turns aplenty... Funny, poignant, and reassuringly upbeat by the end but free of glib platitudes or easy answers." -- Kirkus Reviews, starred review

Matthew Holm was born and raised in the suburbs of Philadelphia, Pennsylvania, and has been drawing comics since he was in middle school. With his sister, Jennifer, Matthew created the graphic novel series Babymouse and Squish. He lives in Portland, Oregon.

Jonathan Follett is a web designer and an internationally published author on the topics of user experience and information design. Marvin and the Moths, co-written with his childhood friend Matthew Holm, is his first work for children. He lives in Boston.
or support indie stores by buying on