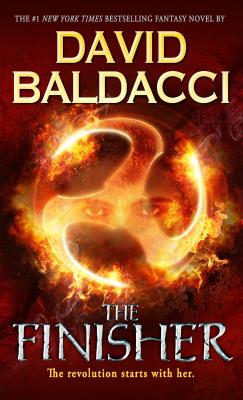 SHE WILL NOT BREAK

Vega Jane was always told no one could leave the town of Wormwood. She was told there was nothing outside but a forest filled with danger and death. And she always believed it -- until the night she saw Quentin Herms run away.

Vega knows Quentin didn't just leave -- he was chased. And he left behind a trail of clues that point to a dark conspiracy at the heart of Wormwood. To follow the clues will attract the attention of influential people willing to kill to keep their secrets. If Vega wants to stay safe, she just needs to keep her head down and her mouth shut. There's only one problem -- Vega Jane never walks away from a fight.

David Baldacci introduces an unforgettable heroine who must think fast, hit hard, and defy all odds to uncover the truth.

"THE FINISHER is an enchanting romp through a fantastical world worthy of Rowling or Brooks. Baldacci proves that his pen can engage youth as well as adults." – Richard Paul Evans, #1 NEW YORK TIMES bestselling author of the Michael Vey series

“Vega Jane has stolen my heart. I've read several novels in the last few years with female protagonists and none of them are as amazing as Vega. . . . . Her adventures must be continued. To not do so would be a crime. This is the female protagonist I want my daughters to read and emulate.” - SciFi Pulse

"What happens when an international best-selling crime novelist tries his hand at a youth fantasy? Well, in this case, success." -- BOOKLIST, starred review

David Baldacci is the author of twenty-seven books for adults, each of which has become both a national and international bestseller. His astonishing career started with ABSOLUTE POWER, which was adapted into a major motion picture starring Clint Eastwood. David's books have sold more than 110 million copies worldwide and have been translated into more than forty-five languages. Together with his wife, Michelle, David established the Wish You Well Foundation to promote family literacy. David and his family live in Virginia.
Loading...
or
Not Currently Available for Direct Purchase