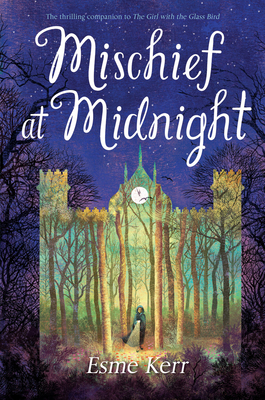 Anastasia Stolonov and Edie Wilson are back at boarding school after spending the summer apart, and they can't wait to be dormmates again! Unfortunately, things don't go as planned, and Edie is stuck with Janet, the new girl at Knight's Haddon.

Janet isn't like anyone the other girls have ever met before. She's cool, confident, and a little rebellious, so Edie is thrilled that Janet seems to like her. And as Edie's friendship with Anastasia becomes rocky, Janet is the only one on Edie's side. But when mysterious things begin to happen, Edie starts to think that Janet may not be all she seems--and suddenly events take a dangerous turn. Will Edie be able to salvage her friendships and uncover what's going on before the clock runs out?

Praise For Mischief at Midnight…

Praise for The Girl with the Glass Bird:

"Full of secrets, murky characters, and psychological intrigue.... The story keeps readers puzzling past its riveting climax, all the way to its gratifying conclusion." -- Publishers Weekly

"A fine mystery that will keep readers engaged until the final, scary reveal -- and leave them eager for the next volume in the series." -- Kirkus Reviews

"[E]xciting and mysterious. There wasn't a moment where you didn't want to read on as the plot kept you captivated with its twists and turns.... A good adventure-mystery book which will make you want to read it again and again and again!" -- Guardian Online (UK)
"This is a rollicking romp of a novel.... with a wonderfully spirited heroine, wickedly unpleasant relatives, teachers with hidden pasts and a fine supporting cast of lacrosse-playing girls. Kerr's debut is impressive and strikes just the right tone." -- Daily Mail (UK)
"This is an engrossing book, cleverly plotted and peopled by very real characters." -- The Scotsman (UK)

Esme Kerr lives between London and Oxford, England, where she studied history. She has three children, two dogs, three cats, and four goldfish.
Loading...
or
Not Currently Available for Direct Purchase