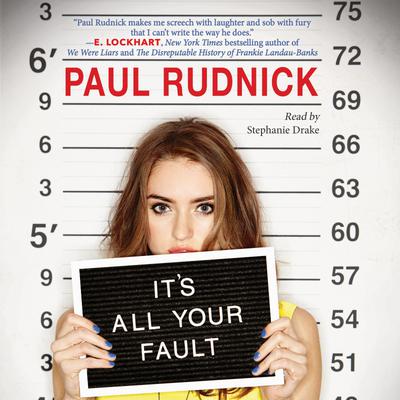 It's All Your Fault (Digital Audiobook)

One last chance. One wild weekend. Flat out the funniest book of the year.

My name is Caitlin and up until forty-eight hours ago I had never:

Tasted alcohol, kissed a boy, sang in public at the top of my lungs, kidnapped anyone or--WHAT? STOLEN A CONVERTIBLE?

Now I'm in jail and I have no idea what I'm going to tell:

The police, my parents, the mayor, all of those camera crews and everyone on Twitter.

I have just noticed that:

My nose is pierced and I have-WAIT? IS THAT A TATTOO?

I blame one person for this entire insane weekend:

Who is also my former best friend.

Who I have HATED for the past four years.

IT'S ALL YOUR FAULT, HELLER HARRIGAN!!!!

Paul Rudnick is a novelist, playwright, and screenwriter, whose screenplays include ADDAMS FAMILY VALUES and IN&OUT. He’s written for VOGUE, ENTERTAINMENT WEEKLY, VANITY FAIR, and the NEW YORKER. His plays have been produced both on and off Broadway.