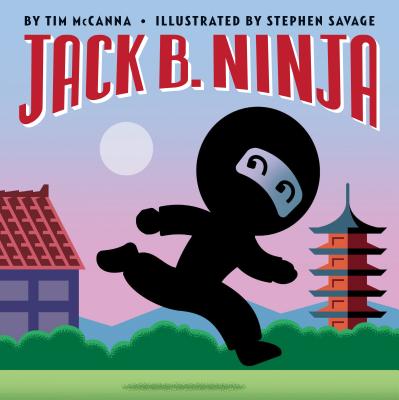 Jack B. Ninja! Jack, be quick! Jack, jump over the bamboo stick! Secret mission starts tonight. Hide in shadow, out of sight.

In this imaginative ninja fantasy inspired by the classic nursery rhyme "Jack Be Nimble," cheer on Jack as he sneaks over castle walls, swims through hidden tunnels, and uncovers a secret treasure -- all while avoiding detection. But when Jack unwittingly springs a trap in the middle of his mission, will he be able to use his ninja skills to escape the bandits and make it back home?

Praise For Jack B. Ninja…

Praise for Supertruck by Stephen Savage:

* "Savage creates a sunny cast of vehicular characters, and his brief text is equally upbeat, punctuated by fun repetition (presto! is also used ironically to herald the cement mixer’s mishaps), and a play on words involving mix-up and mixed up." -- Publishers Weekly, starred review

* "Secret identities, superheroes, and trucks. What more is there to say? . . . This trash-hauler is one super truck!" -- The Horn Book, starred review

* "Savage exploits shapes and colors to create interesting imagery and atmospheric environments for the truck that show that collecting trash is just as heroic as powerfully plowing through snow. A serious treat for truck lovers." -- Kirkus Reviews, starred review

* "Intelligently illustrated, the book leaves readers to wonder if Walrus' adventures were all mischievous spontaneity, or did he wittingly go astray? Refreshing, captivating, elegant and witty. -- Kirkus Reviews Starred Review


Praise for Watersong by Tim McCanna:

* "McCanna’s carefully chosen words are nearly all onomatopoeia, a cacophony of water sounds that resonates on tongue and ear, demanding to be read aloud. Beautiful." -- Kirkus Reviews, starred review

"What happens when robots wind down? Do they actually sleep? Yep, they do, according to this charmer with a mechanical twist. Told in jaunty, rollicking rhymes that are enlivened by colorful, humorous digital illustrations, this robot version of a bedtime story demonstrates that, no matter how energetic a little 'bot' may be, there inevitably comes a time when 'batteries are running low!'. . . Young techies may or may not want to zoom into bed right after listening, but they'll be more than a little 'bitty' ready for repeat readings." -- Kirkus Reviews

"A lively fantasy that will make for a fun read-aloud." -- Booklist

"Those looking for more preschool bedtime stories will find this a great addition to your stacks." -- School Library Journal

Tim McCanna has been an actor, musician, musical theatre writer, graphic designer, and dad. Now he spends his time writing books for children, including Bitty Botty, illustrated by Tad Carpenter, and Watersong, illustrated by Richard Smythe. After growing up in Missouri, Tim currently lives very happily in San Jose, California, with his wife and two kids. Visit him online at timmccanna.com.

Stephen Savage is the author and illustrator of Where’s Walrus?, which was named a best book of the year by Publishers Weekly, Kirkus Reviews, the Horn Book, and the Bulletin of the Center for Children’s Books. He is also the illustrator of the acclaimed New York Times bestselling picture book Polar Bear Night, written by Lauren Thompson, which was named a New York Times Best Illustrated Children’s Book. When Stephen is not on the run, he lives in Brooklyn, New York, with his wife and their daughter.
Loading...
or support indie stores by buying on
(This book is on backorder)