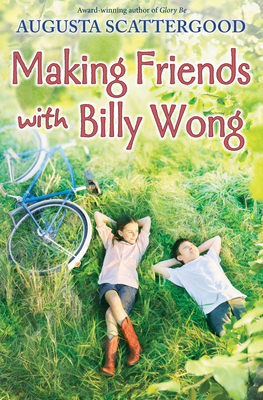 Azalea is not happy about being dropped off to look after Grandmother Clark. Even if she didn't care that much about meeting the new sixth graders in her Texas hometown, those strangers seem much preferable to the ones in Paris Junction. Talk about troubled Willis DeLoach or gossipy Melinda Bowman. Who needs friends like these!

And then there's Billy Wong, a Chinese-American boy who shows up to help in her grandmother's garden. Billy's great-aunt and uncle own the Lucky Foods grocery store, where days are long and some folks aren't friendly. For Azalea, whose family and experiences seem different from most everybody she knows, friendship has never been easy. Maybe this time, it will be.

Inspired by the true accounts of Chinese immigrants who lived in the American South during the civil rights era, these side by side stories--one in Azalea's prose, the other in Billy's poetic narrative--create a poignant novel and reminds us that friends can come to us in the most unexpected ways.

Augusta Scattergood is the author of Glory Be, which was a National Public Radio Backseat Book Club selection, a Texas Bluebonnet Award nominee, and hailed by Newbery medalist Richard Peck as the story of a bygone era "beautifully recalled." Her novel The Way to Stay in Destiny was named an Amazon Best of the Month. A children’s book reviewer and former librarian, Ms. Scattergood has devoted her life and career to getting books into the hands of young readers. Her reviews and articles have appeared in the Christian Science Monitor, Delta Magazine, and other publications. Ms. Scattergood, who lives in St. Petersburg, Florida, is an avid blogger. To learn more, visit www.augustascattergood.com.

“In a quiet story set in 1952, Scattergood shines a light on a rarely told bit of history . . . Azalea's narration is interspersed with occasional entries from Billy's perspective, written in verse, that show his strength of character and desire to succeed, despite facing clear challenges in the segregated South.” --Publishers Weekly

“The characters are finely drawn, and the period elements are smoothly incorporated into the narrative. The author's extensive research on the time and place comes through in the details.” --School Library Journal


Praise for The Way to Stay in Destiny:

“A well-crafted novel that explores such challenging themes as enduring the impact of war on families, establishing a new life, and understanding what love truly means, this will connect well with middle school readers.” --Booklist

“With an eye and ear for period details and dialogue, Scattergood (Glory Be) builds a cast of memorable, realistically flawed characters in an affecting story about holding on to one's dreams.” --Publishers Weekly

“A heartwarming story of friendship, family, and finding one's place in the world despite hardship and heartache.” --School Library Journal


Praise and Accolades for Glory Be:

“There's a whiff of Carson McCullers in Augusta Scattergood's story of a sultry Southern summer long ago when the outside world moved all the markers of Glorianna Hemphill's growing up. It's a summer of bigotry and beehive hairdos, of sit-ins and dangerous boys. All mixed together and beautifully recalled.” --Richard Peck, Newbery Award-winning author of A Year Down Yonder

“Glory Be weaves a seamless story of sisterly love, broken friendships, and the strength that it takes to stand up for the right thing. Augusta Scattergood is at the top of my debut-authors-to-watch list.” --Barbara O'Connor, Parents' Choice Award-winning author of How to Steal a Dog

“In Glory herself, tilting on the threshold of adolescence, Scattergood paints a balanced portrait of childlike self-interest and awakening integrity. This moving, intimate look at America's struggle for civil rights, as seen through the narrow lens of one growing girl, will spark interesting discussion.” --Booklist

“This debut offers a vivid glimpse of the 1960s South through the eyes of a spirited girl who takes a stand.” --Kirkus Reviews

“Scattergood's effective snapshot of the fight against segregation, one town at a time, makes personal the tumultuous atmosphere of the times.” --Publishers Weekly

“Glory is an appealing, authentic character whose unflinching convictions, missteps, and reflections will captivate readers.” --Sch
or support indie stores by buying on
(This book is on backorder)
Copyright © 2020 American Booksellers Association