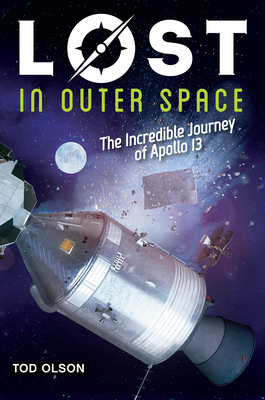 This exciting second book in the Lost series tells the incredible true story of the doomed Apollo 13 moon mission that nearly ended in disaster.
April 13, 1970: Two hundred thousand miles from Earth and counting, an explosion rips through Jim Lovell's spacecraft. The crippled ship hurtles toward the moon at three times the speed of sound, losing power and leaking oxygen into space.

Lovell and his crew were two days from the dream of a lifetime - walking on the surface of moon. Now, they will count themselves lucky to set foot on Earth again.

From "Houston, we've had a problem" to the final tense moments at Mission Control, Lost in Outer Space takes readers on the unbelievable journey of Apollo 13 and inside the minds of its famous and heroic astronauts. Complete with photographs of the crew and diagrams of the spacecraft, this is an up-close-and-personal look at one of the most thrilling survival stories of all time.

Tod Olson is the author of the Lost series, the How to Get Rich historical fiction series, and numerous books for the school/library and classroom markets. He has written for national magazines on the Columbine school shooting, homeless teens, the murder of Matthew Shepard, and many other stories of interest to children and young adults. During his 25 years in children's publishing, he has edited and developed several collections of books for both school/library and the classroom. Tod holds an MFA from Vermont College.
Loading...
or support indie stores by buying on