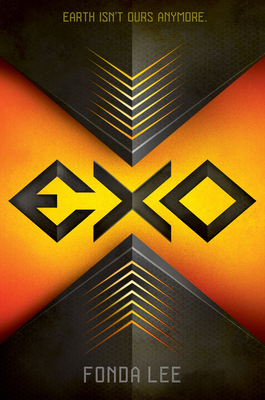 It's been a century of peace since Earth became a colony of an alien race with far reaches into the galaxy. Some die-hard extremists still oppose their rule on Earth, but Donovan Reyes isn't one of them. His dad holds the prestigious position of Prime Liaison in the collaborationist government, and Donovan's high social standing along with his exocel (a remarkable alien technology fused to his body) guarantee him a bright future in the security forces. That is, until a routine patrol goes awry and Donovan's abducted by the human revolutionary group Sapience.When Sapience realizes who Donovan's father is, they think they've found the ultimate bargaining chip. But the Prime Liaison doesn't negotiate with terrorists, not even for his own son. Left in the hands of terrorists who have more uses for him dead than alive, the fate of Earth rests on Donovan's survival. Because if Sapience kills him, it could spark another intergalactic war. And Earth didn't win the last one...

Fonda Lee is the author of Exo, which was a Junior Library Guild selection, and Zeroboxer, which was an Andre Norton Award finalist, a Junior Library Guild selection, and an ALA Top Ten Quick Pick for Reluctant Young Adult Readers. After spending years as a corporate strategist for Fortune 500 companies, she is now a writer and black belt martial artist living in Portland, Oregon. You can visit her online at www.fondalee.com.

Praise For Exo (a novel)…

Praise for Exo
"Fonda Lee's Exo is a deeply immersive story that balances fantastic, original world building with spine-tingling adventure. Days after finishing, I was still thinking about it." –Sabaa Tahir, author of the New York Times bestselling series An Ember in the Ashes
"Exo is my favorite type of sci-fi adventure–a novel that makes you question everything you think about our world . . . and what it means to be human." –Kass Morgan, author of the New York Times bestselling series The 100
"Believable, suspenseful science fiction." –Kirkus Reviews
"Science fiction fans will love this title." –VOYA
"Ethical questions add complex layers to this exciting sci-fi offering." –School Library Journal
Praise for Zeroboxer
"Lee's debut novel is an intense, smart, and action-packed read." –VOYA
"A superior sci-fi outing." –Kirkus Reviews
"A thought-provoking read.” –Booklist
"A strong debut from Lee, combining brutal, visceral athletic scenes with science fiction action, all woven around a complex moral dilemma." –Publishers Weekly
or support indie stores by buying on
Copyright © 2020 American Booksellers Association