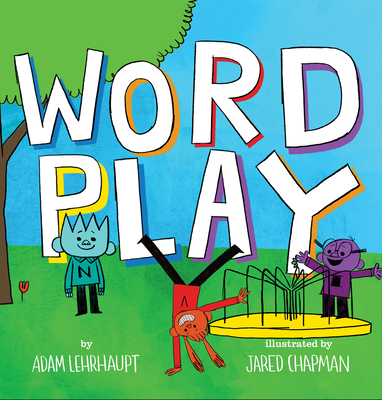 In the funny, smart mold of The Day the Crayons Quit, this sneaky lesson about the parts of speech is also a delightful story about playground competition and new friends.When the parts of speech gather on the playground, Verb is always the star. She can climb! She can frolic! She can DO anything! Her friends Adjective, Adverb, and Interjection all watch admiringly. ("WOW!" says Interjection.)Then Noun comes along -- and Noun can BE anything. A person! A place! Even a thing! ("PRETTY!" says Interjection.) The other parts of speech are fascinated by this new kid, and Verb doesn't like it one bit. But when a new threat menaces the playground, Noun can't move! There's only one part of speech who can DO something about it ... and that might allow Noun and Verb to BE something together: friends.

Jared Chapman has written and illustrated four picture books -- Vegetables in Underwear; Fruits in Suits, Pirate, Viking & Scientist; and Steve, Raised by Wolves. He lives in the piney woods of Northeast Texas with his wife and four kids. You can find him online at jaredchapman.com, and on Twitter, Tumblr, and Instagram as @jaredchapman.
Adam Lehrhaupt is the author of many wildly creative picture books, including Warning! Do Not Open This Book, which won an E. B. White Read-Aloud Honor Award; Please, Open This Book!; I Will Not Eat You; and Chicken in Space. He lives in the suburbs of Philadelphia with his wife, two sons, and two bizarre dogs. You can find him online at www.adamlehrhaupt.com and at @lehrhaupt.
Loading...
or
Not Currently Available for Direct Purchase