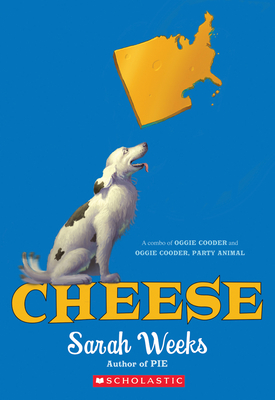 Oggie Cooder loves cheese so much that he carries a slice of cheese with him wherever he goes. It's not just for a snack -- Oggie is an excellent charver. (Charving is when you chew a piece of cheese to carve it in the shape of something.)

The kids at school think Oggie's charving is a little strange. But when a big TV show comes looking for people with unusual talents, Oggie is suddenly Mr. Popular. Can Oggie charve a path to fame and score an invite to the party of the year without melting under the pressure?

No matter how you slice it, you're going to laugh when you read about one small kid becoming a really big cheese, in this hilarious combination of Oggie Cooder and Oggie Cooder, Party Animal.

“Pitch-perfect humor, with just the right touch of zaniness.” -- The Bulletin

Sarah Weeks was born and raised in the United States. She is the author of numerous award-winning novels, including Save Me a Seat with Gita Varadarajan, Honey, Pie, So B. It, Oggie Cooder, and Oggie Cooder: Party Animal. She lives in New York and teaches in the MFA program at the New School in New York City. She can be found on the Web at www.sarahweeks.com.
or support indie stores by buying on