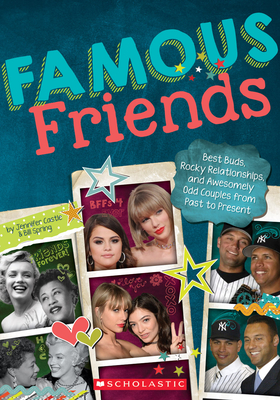 Best Buds, Rocky Relationships, and Awesomely Odd Couples from Past to Present

From John Adams and Thomas Jefferson's "bromance" to Taylor Swift's unstoppable squad, Famous Friends takes readers inside some of the most celebrated friendships throughout history and today.Did you know that John Adams and Thomas Jefferson, friends and political rivals, died only hours apart from each other on the 50th anniversary of the signing of the Declaration of Independence? Or that famed magician Harry Houdini and Sherlock Holmes creator Arthur Conan Doyle were besties until a séance gone wrong ruined their friendship? Famous Friends explores fascinating stories like these to find out what happens when someone who is really famous becomes friends with someone ELSE who's really famous. From the original "bromance" to Taylor Swift's #squadgoals, get ready to learn about the coolest friendships of all time in Famous Friends!

Jennifer Castle grew up writing stories in her head on long school bus rides and was constantly looking for ways to turn her ideas into reality. Eventually, one of her "big ideas" became a published novel, and since then she has written over 10 books for kids and teens, including the Butterfly Wishes series, Together at Midnight, and Famous Friends. Jennifer lives among the mountains, woods, and bountiful farms of New York's Hudson Valley with her husband, two daughters, and two striped cats, who also work part-time as her writing assistants.
Bill Spring is a graduate of the S.I. Newhouse School of Communications at Syracuse University. He has been a professional writer in New York and Los Angeles for over 20 years, including eleven years as Senior Editor and Community Manager for "It's My Life," the PBS Kids website for tweens. As a punch-up screenwriter for Hollywood studios and production companies, Bill has worked on such projects as The Berenstain Bears, Simon Bloom: Gravity Keeper, Aliens in the Attic, Mama's Boy, and Seal Team Seven.
Loading...
or support indie stores by buying on
(This book is on backorder)