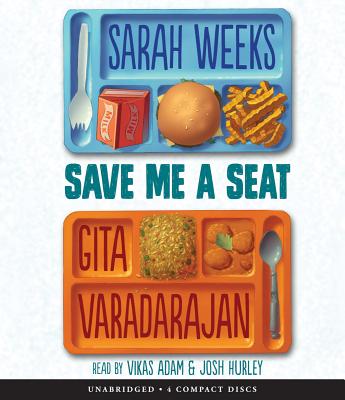 Save Me a Seat

A new friend could be sitting right next to you.Joe and Ravi might be from very different places, but they're both stuck in the same place: SCHOOL.Joe's lived in the same town all his life, and was doing just fine until his best friends moved away and left him on his own. Ravi's family just moved to America from India, and he's finding it pretty hard to figure out where he fits in.Joe and Ravi don't think they have anything in common -- but soon enough they have a common enemy (the biggest bully in their class) and a common mission: to take control of their lives over the course of a single crazy week.

Praise For Save Me a Seat…

* "A novel treatment of a familiar situation delivered with fizz and aplomb." -- Kirkus Reviews, starred review

* "A novel treatment of a familiar situation delivered with fizz and aplomb." -- Kirkus Reviews, starred review

Gita Varadarajan was born and raised in India. She has worked with children all over the world, and now teaches second grade in Princeton, New Jersey. Save Me a Seat, written with Sarah Weeks, was her first novel.
Sarah Weeks was born and raised in the United States. She is the author of numerous award-winning novels, including Save Me a Seat with Gita Varadarajan, Honey, Pie, So B. It, Oggie Cooder, and Oggie Cooder: Party Animal. She lives in New York and teaches in the MFA program at the New School in New York City. She can be found on the web at sarahweeks.com.
Loading...
or support indie stores by buying on