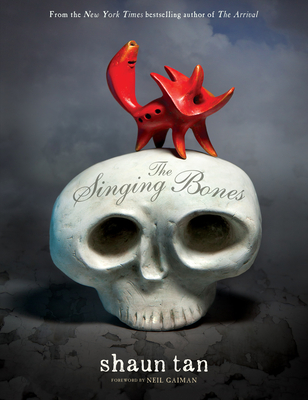 Wicked stepmothers, traitorous brothers, cunning foxes, lonely princesses: There is no mistaking the world of the Brothers Grimm and the beloved fairy tales that have captured generations of readers. Now internationally acclaimed artist Shaun Tan shows us the beautiful, terrifying, amusing, and downright peculiar heart of these tales as never before seen.

With a foreword by Neil Gaiman and an introduction by renowned fairy-tale expert Jack Zipes, this stunning gallery of sculptural works will thrill and delight art lovers and fairy-tale aficionados alike.

Praise For The Singing Bones…

Praise for The Singing Bones

"[Tan's] starkly lit sculptures... have a look reminiscent of Inuit art; they appear simplified and smoothed by many hands. Their scale is hard to gauge. They seem simultaneously monumental and small enough to tuck in a pocket, like Japanese netsuke." -- New York Times Book Review

* "Although readers can only see Tan's remarkable artistry in two dimensions, the figures exert an almost primal force. Rather than simply represent what happens in these stories, these pieces embody their power." -- Publishers Weekly, starred review

* "These inscrutable, unsettling sculptures demand that viewers connect art and tale, examining their own reactions to the darkest impulses and glimpses of light within the book -- and themselves." -- Kirkus Reviews, starred review

* "Almost any person with a bit of understanding about folk and fairy tales can pick this up and find it powerful, amusing, disturbing, and cool, but older readers who take the time to dive into the essays by Gaiman, Zipes, and Tan will get the most out of this thoughtful, creative collection." -- Bulletin of the Center for Children's Books, starred review

"The artist's personal afterword and note on his medium and process, inspired by and stylistically reflective of 'Inuit stone carvings and pre-Columbian clay figurines,' along with some suggestions for further reading, complete this thoughtful compendium." -- Horn Book Magazine

"The Singing Bones will appeal to fans of history and art, as well as lovers of fantasy and fairytales. Reluctant readers and skimmers will like the short excerpts. Unlike any other, this is not your average fairytale book." -- VOYA

* "Filled with both subtlety and grandeur, the book is a unique work that not only fulfills but also expands the potential of its form." -- Booklist, starred review


Praise for Tales from Outer Suburbia

* "These stories representing the visionary work of a master storyteller, illustrator, and designer who cares deeply about his message deserve a place in almost every collection." -- Booklist, starred review

"Shaun Tan rocks my retinas... The book is gorgeously designed, the stories are evocative and mysterious, and every page of Tan's paintings -- I can't bring myself to call them mere illustrations -- commands long moments of study." -- Cleveland Plain Dealer


Praise for The Bird King: An Artist's Notebook

* "The sharing of unfinished work is a generous gesture, and the collection is a treasure trove for any young artist who wants to know more about how ideas are captured on paper." -- Publishers Weekly, starred review

* "Unmistakable are his flawless craftsmanship, his organically industrial yet timeless aesthetic, and his lyrically haunting style and tone... A powerful springboard for the imagination." -- Booklist, starred review


Praise for Rules of Summer
* "As always, the swirl of emotion that Tan's artwork kicks up lingers long after the book is closed." -- Publishers Weekly, starred review
* "Sumptuous and sincere -- this title is a winner." -- School Library Journal, starred review
"Visually fascinating." --New York Times
or support indie stores by buying on
Copyright © 2020 American Booksellers Association