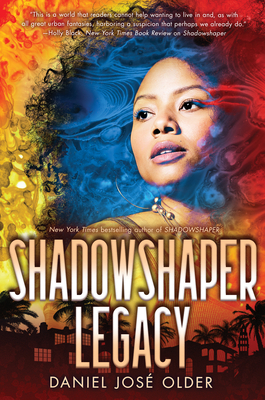 The epic conclusion to the acclaimed Shadowshaper Cypher series!
A house divided

The fate of the worlds

Sierra is determined to protect her own in the coming conflict, even if that means keeping secrets from them. But a deal with Death by one of Sierra's ancestors has far-reaching consequences in the battles of the present, and as old fates tangle with new powers, Sierra will have to harness the Deck of Worlds and confront her family's past if she has any hope of saving the future and everyone she loves. Only doing so will mean following the magic to places the shadowshapers have never gone before . . . and may never return from.

New York Times bestselling author Daniel José Older spins a masterful conclusion to his evocative and captivating Shadowshaper Cypher series in a finale of searing rebellion, the power of fate, and a magic unlike anything you've ever imagined.

"Older's book is a first-rate example of how representation, diversity and themes of social justice and identity can be skillfully woven into a narrative -- not so that they disappear, but so that the story pivots on them in a way that is authentic, exciting, and ultimately satisfying." -- Cory Doctorow, Boing Boing

* "With the same keen eye for the power of art and a sly commentary on the insidious nature of racism and white supremacy -- as well as a deft handle on zippy teenage banter and cinematic pacing -- Older delivers a fantastic follow-up to his best-selling Shadowshaper (2015), which not only intensifies the stakes of the first book but expands the scope of his well-wrought, vivid world building... The expanding cast of well-rounded characters, clearly choreographed action, and foreshadowing of installments to come will have fantasy fans eagerly awaiting more of this dynamic, smart series." -- Booklist, starred review