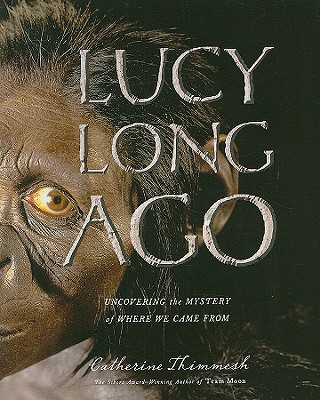 Uncovering the Mystery of Where We Came From

Illustrated in full color throughout with stunning compuer-generated artwork and with rare paleo photography, this story of scientific sleuthing invites us to wonder what our ancestors were like. From the discovery of Lucy's bones in Hadar, Ethiopia, to the process of recovering and interpreting them (a multidisciplinary approach with contributions from paleontologists, paleoanthropologists, archeologists, geologists and geochronologists), this book shows how a pile of 47 bones led scientists to discover a new -- and, at 3.2 million years old, a very very old -- species of hominid, ancestral to humans.

Praise For Lucy Long Ago: Uncovering the Mystery of Where We Came From…

"Here’s a nonfiction book that deserves the highest of compliments: it reads like a science book . . . Thimmesh opens her narrative with a poetic conjecture that gives such adventure its mystery and due: “Long ago it lived...even before it had a name. It climbed trees; it roamed the savannah on two legs; it munched on berries and grasses.” The answer to the implied question—“What is ‘it’?”—propels the reader to turn page after page . . . a handsome book, but also a substantive one."--The Horn Book Magazine

"With unexpected simplicity and even poetry, Thimmesh uses two beginnings to tell the story of the hominid who changed humans’ family tree . . . the final portrait of Lucy as she may have looked is a stunner. Like the investigative method itself, this sparks questions and also answers them."— Booklist, starred review

“. . . this should satisfy a young patron’s request for material on seriously old human remains.”--The Bulletin

"The book’s greatest strength is how it underscores the fluidity of our understanding in a field like anthropology; it shows how one discovery can change the thinking of scientists in a dramatic way . . . The clear writing, excellent photographs, and the unique approach of exploring the field of anthropology through one spectacular specimen make this book a first purchase."--School Library Journal, starred review