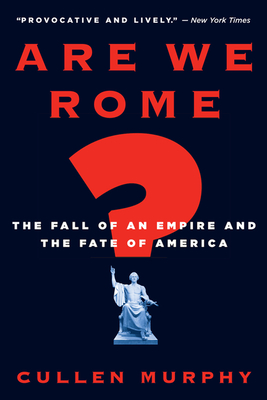 The Fall of an Empire and the Fate of America

The rise and fall of ancient Rome has been on American minds from the beginning of our republic.Today we focus less on the Roman Republic than on the empire that took its place. Depending on who’s doing the talking, the history of Rome serves as either a triumphal call to action or a dire warning of imminent collapse. In Are We Rome? the esteemed editor and author Cullen Murphy reveals a wide array of similarities between the two empires: the blinkered, insular culture of our capitals; the debilitating effect of bribery in public life; the paradoxical issue of borders; and the weakening of the body politic through various forms of privatization. Murphy persuasively argues that we most resemble Rome in the burgeoning corruption of our government and in our arrogant ignorance of the world outside -- two things that must be changed if we are to avoid Rome’s fate.