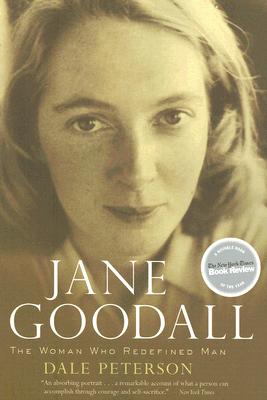 The Woman Who Redefined Man

This essential biography of one of the most influential women of the past century shows how truly remarkable Jane Goodall’s accomplishments have been. Goodall was a secretarial school graduate when Louis Leakey, unable to find someone with more fitting credentials, first sent her to Gombe to study chimpanzees. In this acclaimed work, Dale Peterson details how this young woman of uncommon resourcefulness and pluck would go on to set radically new standards in the study of animal behavior. He vividly captures the triumphs and setbacks of her dramatic life, including the private quest that led to her now-famous activism.

Peterson, a longtime Goodall collaborator, has a unique knowledge of his subject. Candid and illuminating, this work will be a revelation even to readers who are familiar with the public Goodall as presented in her own writing.

Praise For Jane Goodall: The Woman Who Redefined Man…

A loving depiction of a remarkable woman who charmed the world as much as it captivated her. Kirkus Reviews, Starred

Peterson vividly and significantly enriches our understanding of Goodall as a scientist, spiritual thinker, and humanist.
Booklist, ALA, Starred Review

Biography of a most impressive primate.
The San Diego Union-Tribune —

Dale Peterson is the coauthor with Jane Goodall of Visions of Caliban (a New York Times Notable Book and a Library Journal Best Book) and the editor of her two books of letters, Africa in My Blood and Beyond Innocence. His other books include The Deluge and the Ark, Chimpanzee Travels, Storyville USA, Eating Apes, and (with Richard Wrangham) Demonic Males. They have been distinguished as an Economist Best Book, a Discover Top Science Book, a Bloomsbury Review Editor's Favorite, a Village Voice Best Book, and a finalist for the PEN New England Award and the Sir Peter Kent Conservation Book Prize in England. He resides in Massachusetts.
Loading...
or
Not Currently Available for Direct Purchase