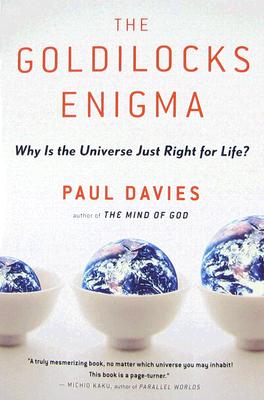 Why Is the Universe Just Right for Life?

The Goldilocks Enigma is Paul Davies’s eagerly awaited return to cosmology, the successor to his critically acclaimed bestseller The Mind of God. Here he tackles all the "big questions," including the biggest of them all: Why does the universe seem so well adapted for life?

In his characteristically clear and elegant style, Davies shows how recent scientific discoveries point to a perplexing fact: many different aspects of the cosmos, from the properties of the humble carbon atom to the speed of light, seem tailor-made to produce life. A radical new theory says it’s because our universe is just one of an infinite number of universes, each one slightly different. Our universe is bio-friendly by accident -- we just happened to win the cosmic jackpot.

While this "multiverse" theory is compelling, it has bizarre implications, such as the existence of infinite copies of each of us and Matrix-like simulated universes. And it still leaves a lot unexplained. Davies believes there’s a more satisfying solution to the problem of existence: the observations we make today could help shape the nature of reality in the remote past. If this is true, then life -- and, ultimately, consciousness -- aren’t just incidental byproducts of nature, but central players in the evolution of the universe.

Whether he’s elucidating dark matter or dark energy, M-theory or the multiverse, Davies brings the leading edge of science into sharp focus, provoking us to think about the cosmos and our place within it in new and thrilling ways.

Praise For The Goldilocks Enigma: Why Is the Universe Just Right for Life?…

"Paul Davies' Cosmic Jackpot is a truly mesmerizing book, no matter which you universe you may inhabit!" --Michio Kaku, prof. of theoretical physics, author of Hyperspace and Parallel Worlds

PAUL DAVIES is an internationally acclaimed physicist, cosmologist, and astrobiologist at Arizona State University. He is the author of more than twenty books, including The Mind of God, About Time, How to Build a Time Machine, and The Goldilocks Enigma.
Loading...
or
Not Currently Available for Direct Purchase