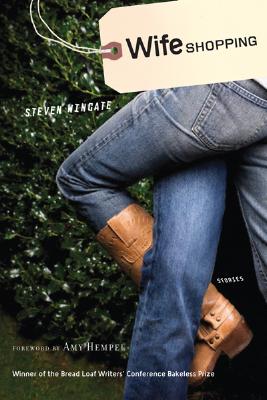 Wifeshopping centers on the ultimate human quest: the search for companionship, love, and understanding. These captivating stories feature American men, love-starved and striving, who try and often fail to connect with the women they imagine could be their wives. Some of the women are fiancées, some are new girlfriends, some are strangers who cross the men’s paths for only a few hours or moments.
In “Beaching It,” an artist traveling on the summer circuit begins an affair with a rich, married local. In “Me and Paul,” a lonely traveler adopts an alter ego to help him impress a single mother. In “Bill,” a trip to a flea market highlights the essential differences between a man and his fiancée. Throughout this thoroughly entertaining read, Wingate’s sympathetic characterizations reveal both the hopefulness and the heartache behind our earnest but sometimes misguided attempts at intimacy.

"Could be the exact masculine counterpart to Pam Houston’s Cowboys Are My Weakness." -- Janis Hallowell —

Steven Wingate's stories have received awards from Gulf Coast and The Journal and been nominated for the Pushcart Prize. Wifeshopping is the recipient of the 2007 Katharine Bakeless Nason Prize for fiction, selected by Amy Hempel and awarded by the Middlebury College Bread Loaf Writers’ Conference. Wingate teaches writing at the University of Colorado at Boulder and lives in Lafayette, Colorado.