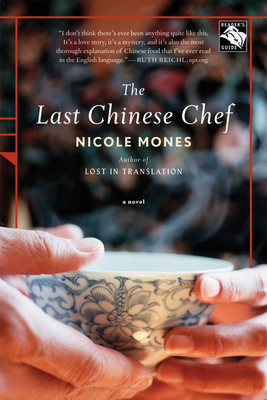 This alluring novel of friendship, love, and cuisine brings the best-selling author of Lost in Translation and A Cup of Light to one of the great Chinese subjects: food.
When Maggie McElroy, a widowed American food writer, learns of a Chinese paternity claim against her late husband’s estate, she has to go immediately to Beijing. She asks her magazine for time off, but her editor counters with an assignment: to profile the rising culinary star Sam Liang. In China Maggie unties the knots of her husband’s past, finding out more than she expected about him and about herself.
With Sam as her guide, she is also drawn deep into a world of food rooted in centuries of history and philosophy. To her surprise she begins to be transformed by the cuisine, by Sam’s family — a querulous but loving pack of cooks and diners — and most of all by Sam himself. The Last Chinese Chef is the exhilarating story of a woman regaining her soul in the most unexpected of places.

Praise For The Last Chinese Chef: A Novel…

Finalist for the Kiriyama Prize for Fiction World Gourmand Award Winner "Stunning... will really make your mouth water."
-Entertainment Weekly "Entertaining and learned… the perfect leisure read…effortless… profound… delicious."
-Wall Street Journal "The most thorough explanation of Chinese food I’ve ever read in the English language."
-Ruth Reichl, NPR "A dazzling journey… a feast… a page turner both exciting and wise."
-David Henry Hwang "Food and travel writing at its best… engaging, inventive, and incredibly informative."
-Booksense "It doesn’t seem quite fair for an author to be as skilled…as Nicole Mones. Entrances."
-Seattle Times "Will transport you… you won’t want to put the book down…"
-NW Asian Weekly "A masterpiece for Chinese food."
-Edouard Cointreau, judges’ panel, World Gourmand Award "Subtle…meticulously researched… will entice. Avoid reading while hungry."
-Kirkus Reviews "Sumptuous... tantalizing. Early in her visit, Maggie scoffs at the idea that food can heal the human heart. Mones smartly proves her wrong."
-Publisher’s Weekly "Crackling with energy and ambition.. will delight… erudite details and butter-smooth prose."
-Diana Abu-Jaber "Maybe you never considered the imperial heights of Chinese cuisine. Nicole Mones can change that with the flip of a page."
-Charlotte Observer "Outstanding and beautifully written."
-Willamette Week Erudite and entertaining…mouthwatering details on one of the world’s greatest cuisines."
-Northwest Asian Times "Captivating…evocative… admirably adept…invaluably quirky knowledge about Chinese culture and food. "
-New York Times Book Review "Delicious… deftly portrays complexity and passion of a cross-cultural love affair… and the rarefied and competitive world of Chinese haute cuisine, a subtle complex art that reached its apogee in the court of the Emperor and was nearly obliterated in Mao’s Cultural Revolution."
Judges’ Citation, Kiriyama Prize "Delicious…reveals the sophistication of an ancient culture but also its corruption, cronyism, and poverty. "
-Waterstone Review —

NICOLE MONES is the prizewinning author of four novels, Night in Shanghai, The Last Chinese Chef, Lost inTranslation, and A Cup of Light, which are published in more than twenty-five countries.