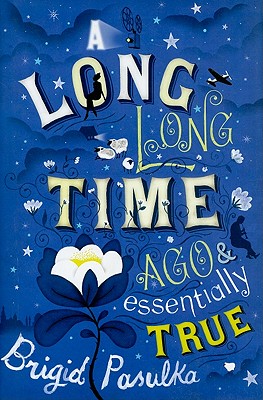 A Long, Long Time Ago and Essentially True

On the eve of World War II, in a place called Half-Village, a young man nicknamed the Pigeon falls in love with a girl fabled for her angelic looks. To court Anielica Hetmanská he offers up his "golden hands" to transform her family’s modest hut into a beautiful home, thereby building his way into her heart. Then war arrives to cut short their courtship, delay their marriage, and wreak havoc in all their lives, even sending the young lovers far from home to the promise of a new life in Kraków.
Nearly fifty years later, their granddaughter, Beata, repeats their postwar journey, seeking a new life in the fairy-tale city of her grandmother’s stories. But when she arrives in Kraków, instead of the whispered prosperity of the New Poland, she discovers a city caught between its future and its past, and full of frustrated youths. Taken in by her toughtalking cousin Irena and Irena’s glamorous daughter Magda, Beata struggles to find her own place in 1990s Kraków and in the constellation of Irena and Magda’s fierce love. But unexpected events-- tragedies and miracles-- can change lives and open eyes. And Beata may just find a new way of seeing her family's and her country's history-- as well as a vision for her own role in the New Poland. Whimsical, wise, beautiful, magical, and sometimes even heartbreaking, A Long, Long Time Ago and Essentially True weaves together two remarkable stories, reimagining half a century of Polish history through the legacy of one unforgettable love affair.


Praise For A Long, Long Time Ago and Essentially True…

Winner of the PEN/Hemingway Prize for Fiction "In this life-affirming novel of past and present, Brigid Pasulka twines the bright colors of  fable with the subtler tones of disillusionment, survival, and rebirth—incarnating not only her characters and their lives, but Poland itself. Rarely does a novel succeed so well in evoking place and history, especially with a story as winning as this one. A marvelous debut."
—Nicole Mones, author of The Last Chinese Chef and Lost in Translation

"Two lives, a grandmother's and her granddaughter's, are knit together in a finely wrought tapestry that illuminates an inheritance of a less familiar kind. At once haunting and exquisitely vibrant, Pasulka's original tale is a treasure, transcending history, time, and place." -- Martha McPhee, author of Gorgeous Lies

"Pasulka’s delightful debut braids together two tales of old and new Poland. . . . Pasulka creates a world that’s magical despite the absence of magical happenings, and where Poland’s history is bound up in one family’s story." --Publishers Weekly (Starred Review)

"Grand in scope, yet meticulous in detail, Brigid Pasulka's generous and affectionate novel finds universal truths in both its most-dramatic moments and its most-intimate observations. A compassionate, elegant, and moving debut." --Adam Langer, author of Crossing California

"Funny and romantic like all the best true stories." -- Charlotte Mendelson, author of When We Were Bad

"Delightful … Pasulka creates a world that’s magical despite the absence of magical happenings, and where Poland’s history is bound up in one family’s story."

"Grand in scope, yet meticulous in detail, Brigid Pasulka’s generous and affectionate novel finds universal truths in both its most-dramatic moments and its most-intimate observations. A compassionate, elegant, and moving debut."
-Adam Langer, author of CROSSING CALIFORNIA

"Their love story encapsulates the complications and frustrations of modern Poland."

"One of the many gifts of Brigid Pasulka''s debut novel, A Long Long Time Ago & Essentially True, is that it transports us through the outer layers straight into the heart of Poland, brilliantly evoking the country''s emotional landscape. Pasulka poignantly portrays Poland''s checkerboard history iin the latter half of the 20th century and the evolution of its national character under Nazi occupation, Soviet Communism, and post-Soviet capitalism. With a passion for Poland that suffuses each page, A Long Long Time Ago & Essentially True rings hauntingly, echoingly real."

"The story of Pigeon and Anielica is consistently magical, and this first-time novelist has an indisputable talent for a tale well-told. Like any good host, she makes us feel as if we''ve found a small piece of home."

"Pasulka brings to both narratives a warm understanding of her characters’ foibles as they struggle to find happiness in a land racked by tumultuous change."

"Pasulka…does a marvelous job of capturing her ancestral homeland’s culture, including its supple, evocative language."

"Her sweet, generous novel offers hope that her appealing heroine and a nation to often brutalized frequently by the forces of history will both have better tomorrows."

"Essentially True is warm and charming, and it brings together a matched pair of stories about old and new Poland together with careful craft."

"Pasulka shows the way that history''s disappintments provide the strength for new growth."

"...Pasulka, an American descendant of Polish immigrants, has charms of her own—appealing characters and keen observations... The most resonant moments come in Baba Yaga’s everyday perceptions."