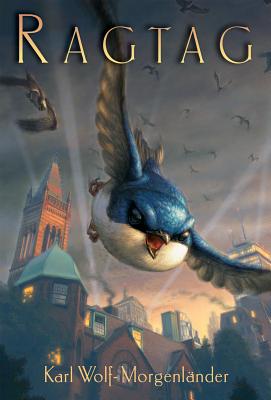 Warring birds battle over the city of Boston in an action-packed fantasy.

In this engrossing story for older middle-graders, hundreds of birds of prey have been driven out of the Berkshires by encroaching human development. They head toward Boston, which is already occupied by the birds of the city—but that won’t stop the raptors. Soon the Talon Empire and the Feathered Alliance are at war, and as the battle ensues, an unlikely hero emerges to defend his home: a young swallow named Ragtag.

“The story line moves quickly, making it a good choice for reluctant readers. The qualities of friendship, loyalty, and sacrifice are themes explored as Ragtag and his friends battle for their lives and homes. An enjoyable read that could easily become a series.”—School Library Journal “City-lovers will thrill when birds fly into the Boston Public Library and the Old South Church, hide at the Public Garden’s swan pond and catch an ear-splitting ride on the undercarriage of a subway train. For bird, battle and Boston enthusiasts.”—Kirkus Reviews

Karl Wolf-Morgenländer grew up in a small town outside Boston. He was inspired to write Ragtag, his first novel, after witnessing an attack by a peregrine falcon on a flock of pigeons in Copley Square.