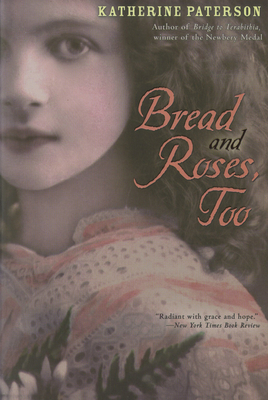 Bread and Roses, Too

Rosa’s mother is singing again, for the first time since Papa died in an accident in the mills. But instead of filling their cramped tenement apartment with Italian lullabies, Mamma is out on the streets singing union songs, and Rosa is terrified that her mother and older sister, Anna, are endangering their lives by marching against the corrupt mill owners. After all, didn’t Miss Finch tell the class that the strikers are nothing but rabble-rousers—an uneducated, violent mob? Suppose Mamma and Anna are jailed or, worse, killed? What will happen to Rosa and little Ricci? When Rosa is sent to Vermont with other children to live with strangers until the strike is over, she fears she will never see her family again. Then, on the train, a boy begs her to pretend that he is her brother. Alone and far from home, she agrees to protect him . . . even though she suspects that he is hiding some terrible secret. From a beloved, award-winning author, here is a moving story based on real events surrounding an infamous 1912 strike.

Praise For Bread and Roses, Too…

"A beautifully written novel that puts a human face on history...Paterson at her best--and that's saying a lot." Kirkus Reviews, Starred

"[Paterson] remains a smooth storyteller, and this is an informative exploration of a key moment in U.S. labor history." Bulletin of the Center for Children's Books

Katherine Paterson’s international fame rests not only on her widely acclaimed novels but also on her efforts to promote literacy in the United States and abroad. A two-time winner of the Newbery Medal (Bridge to Terabithia and Jacob Have I Loved) and the National Book Award (The Great Gilly Hopkins and The Master Puppeteer), she has received many accolades for her body of work, including the Laura Ingalls Wilder Medal, the Hans Christian Andersen Medal, the Astrid Lindgren Memorial Award, and the Governor’s Award for Excellence in the Arts, given by her home state of Vermont. She was also named a Living Legend by the Library of Congress. She served as the National Ambassador for Young People's Literature in 2010-2011.
Ms. Paterson is vice president of the National Children’s Book and Literacy Alliance (www.thencbla.org), which is a not-for-profit education and advocacy organization. The NCBLA’s innovative projects actively promote literacy, literature, libraries, and the arts.  She is both an Alida Cutts Lifetime Member of the United States Board on Books for Young People (www.usbby.org) and a lifetime member of the International Board on Books for Young People (www.ibby.org).
She and her husband, John, live in Montpelier, Vermont. They have four children and seven grandchildren. For more information, visit www.terabithia.com.
Loading...
or support indie stores by buying on