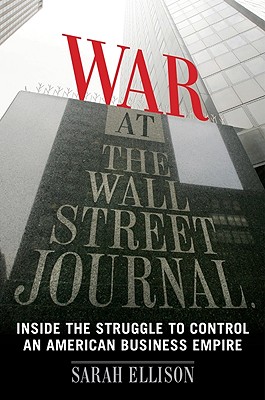 Inside the Struggle To Control an American Business Empire

While working at the "Wall Street Journal," Sarah Ellison won praise for covering the $5 billion acquisition that transformed the pride of Dow Jones and the estimable but eccentric Bancroft family into the jewel of Rupert Murdoch's kingdom. Here she expands that story, using her knowledge of the paper and its people to go deep inside the landmark transaction, as no outsider has or can, and also far beyond it, into the rocky transition when Murdoch's crew tussled with old "Journal" hands and geared up for battle with the "New York Times." With access to all the players, Ellison moves from newsrooms to estates and shows Murdoch, finally, for who he is--maneuvering, firing, undoing all that the Bancrofts had protected. Her superlative account transforms news of the deal into a timeless chronicle of American life and power.


Praise For War at the Wall Street Journal: Inside the Struggle To Control an American Business Empire…

“Sarah Ellison has written a definitive, indeed cinematic, account of the News Corporation’s conquest and occupation of this venerable business publication, and of the subterranean battle of motives and moods in the Bancroft family psychodrama . . . She spins an absorbing yarn played out on super-yachts and in corporate jets, populated by an irresistible cast of characters.” —New York Times Book Review

"Ellison, who covered the takeover of Dow Jones as a Wall Street Journal reporter, uses her access . . . to chronicle the deal with precision. Inside the news business such detailed narratives are called "tick-tocks," and hers beats like a metronome.” —Washington Post

“Balanced and nuanced . . . a riveting and engaging examination of the current state of U.S. media and the drama behind one of its most important companies.” —Boston Globe

"Ellison offers a close look into a raw, aggressive power in international commerce." —Publishers Weekly   "This is an excellent book." —Booklist   "A ten-year Journal veteran and thoroughly versed in the paper’s culture, the author capably describes the newsroom dynamic, both pre- and post-Murdoch . . . It’s a measure of Ellison’s evenhandedness that, while clearly no Murdoch fan, she candidly exposes the ownership and management deficiencies that made a journalistic icon so vulnerable to capture. A gripping reconstruction of a media story whose implications have yet to fully unfold." —Kirkus   "An insider’s account, though an excerpt suggests that she's ready to be hard on both sides; for anyone who cares about the state of journalism today." —Library Journal   "This is a superb book about a momentous event that we knew less about than we thought. With the surgical skill of a first rate reporter and story teller, Sarah Ellison recounts a true story that reads as if ripped from a novel. It is a saga populated by powerful moguls and institutions, by double dealing individuals and a dysfunctional family. There is not much glory in this tale, but there is much to chew on and digest." —Ken Auletta, author of Googled: The End of the World as We Know It "Delicious inside stuff. Sarah Ellison seems to have been present at every party, executive office meeting, secret hotel suite conference, corporate plane ride, etc. in Rupert Murdoch’s hijacking of the the Wall Street Journal. Everybody appears to have talked with her. It makes for an engrossing read and the definitive account." —Mark Bowden, author of Black Hawk Down

"[Ellison] spins an absorbing yarn played out on super-yachts and in corporate jets, populated by an irresistible cast of characters."
—New York Times


"A book as devastatingly definitive as any Journal tick tock."
—Los Angeles Times

"Ellison, who covered the takeover of Dow Jones as a Wall Street Journal reporter, uses her access to ‘all of the significant players in the narrative’…to chronicle the deal with precision. Inside the news business such detailed narratives are called 'tick-tocks,' and hers beats like a metronome."
—Washington Post "The story behind his takeover of the newspaper is recounted in limber fashion in War at the Wall Street Journal, by ex-Journal reporter Sarah Ellison. . . . Based on her original reporting for the newspaper (and re-reported here), the book is . . . scrupulously documented."
—Bloomberg
"Ellison transforms the daily copy she filed as media reporter for the paper into a nail-biting thriller that delves into the family dysfunction, backroom dealings and ego bruising that characterized the decade’s most fascinating business transaction. There’s a panoply of new material here, from the incessant infighting that rendered Dow Jones’ owners, the Bancroft family, impotent in their final dealings with Murdoch, to the mind-boggling details of the multimillion-dollar severance package paid to Marcus Brauchli, the ousted Journal editor"
—Kirkus, nonfiction supplement
"The Dow Jones saga is a fascinating story and you did a terrific job of telling it."
—Warren Buffett "Former Journal reporter Sarah Ellison's War at the Wall Street Journal - a detailed and fast-moving account of Murdoch's 2007 deal to acquire Journal-parent company Dow Jones - couldn't have come at a better time, just as Murdoch begins his battle with the Times....Ellison's book provides not just a deeply investigated back-story of the deal, but also an insider's perspective."
—BookForum