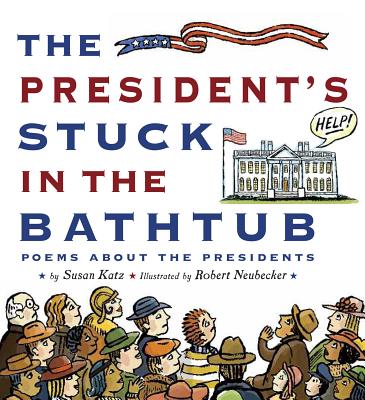 The President's Stuck in the Bathtub

Poems About the Presidents

Playful political poems about the penchants and peccadilloes of the presidents!Sure, William Taft got stuck in his tub, but did you know that John Quincy Adams used to skinny-dip in the Potomac? Herbert Hoover spoke Chinese with his wife, and Gerald Ford had his name changed from Leslie Lynch King. It’s true! In The President’s Stuck in the Bathtub, the lives of the presidents are served up as fact-filled and fanciful poems that will make you laugh, cringe, and gasp with amazement at the colorful cast of men and women who have lived in the White House. With footnotes relating the facts behind the inspiration for each poem, and a section called “Presidential Notes and Quotes” in the back, this is one hilarious history lesson that kids will elect to read over and over again!

Praise For The President's Stuck in the Bathtub: Poems About the Presidents…

"Humorous yet informative. . . . These sorts of details are just the kind to pique young readers’ interests. . . . Sure to be popular."—Booklist "Katz takes playful swings at U.S. presidents in poems as funny as they are informative...an unexpected and diverting look at presidents past and present."--Publishers Weekly"In forty-three poems, Katz gives each of our U.S. presidents their due."--Horn Book, starred review

Susan Katz is the author of LOOKING FOR JAGUAR AND OTHER RAINFOREST POEMS (Greenwillow), which received starred reviews, and two other poetry collections. Her novel, SNOWDROPS FOR COUSIN RUTH, (Simon and Schuster) was a Publishers Weekly "Flying Start." She lives in Phoenixville, Pennsylvania.

ROBERT NEUBECKER's acclaimed picture books include Wow! School!; Wow! America!; Wow! City!; and Courage of the Blue Boy. He will be publishing his first book with Harcourt in fall 2008, Monsters on Machines by Deb Lund. He lives in Park City, Utah. www.neubecker.com
Loading...
or
Not Currently Available for Direct Purchase