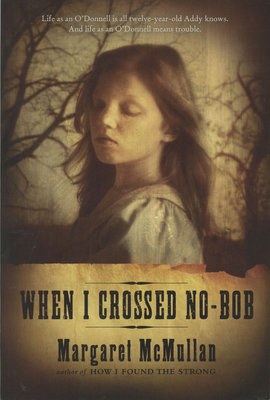 This novel takes place 10 years after HOW I FOUND THE STRONG ended and deals with the reconstruction and race relations after the war. Told from the point of view of 13 year old Addy, who is abandoned by her redneck family and taken in by Shanks (from STRONG) and his new wife. There Addy learns she can make different decisions than those dictated by her own racist family. Vivid scenes involving the Ku Klux Klan, a school burning and attempted lynching add drama to this riveting coming of age historical novel.
Author, Margaret McMullen captures the hardship and hardscrabble feel of this post-Civil War time as well as the hopeful rebuilding of southern communities.

Praise For When I Crossed No-Bob…

"[A] deeply philosophical, first-person account of life...uplifting and heartbreaking as the same time." Bookpage, November 2007 Bookpage

"McMullan allows Addy to tell her own tale in an ingenuous present tense." The Horn Book Jan/Feb 2008 Horn Book

"Addie's voice is likable and she embodies the common theme in YA literature of rising above." KLIATT 11/01/07 KLIATT

"Suspenseful plotting and language...very appealing characters...a compelling portrait of life in Mississippi during Reconstruction." Bulletin February 2008 Bulletin of the Center for Children's Books

Margaret McMullan is the acclaimed author of When I Crossed No-Bob and How I Found the Strong, as well as the adult novels In My Mother’s House and When Warhol Was Still Alive. Her work has appeared in such publications as Glamour, the Chicago Tribune, and Michigan Quarterly Review. She is a professor and the chair of the English department at the University of Evansville in Indiana.
Loading...
or
Not Currently Available for Direct Purchase