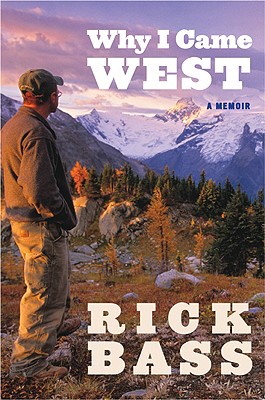 Why I Came West

In this searching memoir, Rick Bass describes how he first fell in love with theWest — as a landscape, an idea, and a way of life. Bass grew up in the suburban sprawl of Houston, attended college in Utah, and spent eight years working as a geologist in Mississippi before packing up and heading west in pursuit of something visceral and true. He found it in the remote Yaak Valley of northwestern Montana, where despite extensive logging, not a single species has gone extinct since the last Ice Age.  Bass has lived in the Yaak ever since, a place of mountains, outlaws, and continual rebirth that transformed him into the writer, hunter, and activist that he is today. The West Bass found is also home to deep-rooted philosophical conflicts that set neighbor against neighbor — disputes that Bass has joined reluctantly, but necessarily, to defend and preserve the wilderness that he loves.

RICK BASS’s fiction has received O. Henry Awards, numerous Pushcart Prizes, awards from the Texas Institute of Letters, fellowships from the National Endowment for the Arts and the Guggenheim Foundation, and his memoir, Why I Came West, was a finalist for a National Book Critics Circle Award.